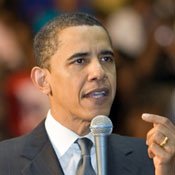 Obama: Justice Has Been Done

Good evening. Tonight, I can report to the American people and to the world that the United States has conducted an operation that killed Osama bin Laden, the leader of ...

Obama Speaks Out Against Bullying

The message is in response to the recent suicides of young adults who were bullied for being gay. The video appears on the

Health Reform: What's In It?

Gov. Haley Barbour and other opponents of health-care reform are making final efforts to derail an upcoming House vote on the Senate health-care package this Sunday.

President Barack Obama pushed for more job creation during his State of the Union address last night. Facing the loss of two governor's races and the Massachusetts Senate seat formally ...

Yesterday, President Obama spoke at a memorial for the Americans murdered at Fort Hood last week. In honor of the victims, and all veterans today, here are his comments, verbatim:

President Obama delivered a back-to-school speech to students this morning emphasizing personal responsibility, but not all Mississippi students got the message. The speech, which was televised and available as a ...

Jan. 20, 2009, is here, and Barack Obama will make history as the next president of the United States. What are your thoughts on this historic occasion? What message do ...

He's now winning by 7 percent rather than the 5 percent on Election night:

Secretary of State Delbert Hosemann's office has released the following update on the number of new registrations. Note that he advises you to check your registration with the Circuit Clerk's ...

Per Mark Ambinder at The Atlantic:

According to a story at the Huffington Post, the Obama camp still expects McCain to attend the debate; if he doesn't, Obama will head to Oxford anyway and hold a ...