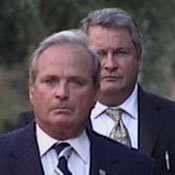 This morning The U.S. Supreme Court announced it would not hear the case of Mississippi Attorney Paul Minor and former judges Walter "Wes" Teel and John Whitfield convicted of fraud ...

A change in federal court opinion could soon affect some media-saturated state trials, including the corruption trial of Hinds County Circuit Judge Bobby DeLaughter and the ongoing appeal of Mississippi ...

Associated Press and Forbes are reporting: