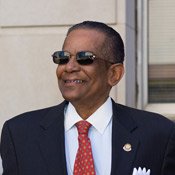 Mayor Frank Melton outside the federal courthouse during his first federal trial in February.

The Associated Press is reporting that Jackson Mayor Frank Melton has died. Shortly before polls closed Tuesday evening around 7 p.m., the mayor went into cardiac arrest at his 2 ...

A federal judge will hear arguments today on whether to hold separate trials for Mayor Frank Melton and his former police bodyguard Michael Recio. Melton and Recio are under federal ...

Melton: ‘How Dumb Can You Be?'

Jones County Circuit Court Judge Billy Joe Landrum gave Jackson Mayor Frank Melton the keys to the courtroom at a hearing today, allowing him to belligerently insult the attorney for ...

In an interview in City Hall today, Mayor Frank Melton broke the news to the Jackson Free Press that he is going to run for re-election as mayor of Jackson. ...