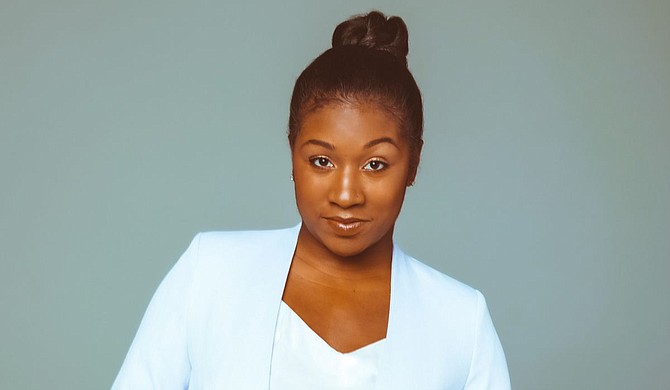 At 15 years old, Jackson native Essence Odomes finagled her way into an acting class that actress, director and producer Tasha Smith hosted in Atlanta. Smith offered the teenager a piece of advice: move out of her home state.

“She basically told me, ‘You are going to have to leave Mississippi if you want to (act) because there is nothing there,’” Odomes says. “So I spent the next couple years until graduation focusing on getting out of Mississippi.”

Odomes performed in her first play at age 7 and later honed her acting and theatrical skills in Jackson Public Schools’ Academic and Performing Arts program. After high school, she attended Spelman College for a semester before moving to California to attend the University of California, Los Angeles.

During a trip home, she met her now-husband Dezron Odomes, who soon joined her at UCLA and majored in music business. Essence completed her bachelor’s degree in acting for film and television. However, the pre- and post-production classes she took intrigued her the most.

“(Those courses) opened my eyes to the behind-the-scenes world that I never knew about,” she says. “I knew that if I could get a piece of the backend that I could then empower not only myself with the opportunities that I was looking for but I could also create them (for others) as well.”

Essence and Dezron moved to Atlanta in 2013, where the former worked several production jobs, including on the seventh installment of the “Fast & Furious” franchise. These experiences opened doors for both to land positions at Tyler Perry Studios. The couple married in 2018.

“We started working at Tyler Perry studios with the objective to one day soon do this type of work at home,” Essence says, and home they went, moving back to Mississippi in December 2020.

The Odomes founded their own production company, The Chosen Entertainment and Media, now The Chosen Productions, with a mission of using and creating a trained workforce for film and entertainment in the area, fulfilling a need that they noticed while growing up in Mississippi.

“Producers come from out of state and take advantage of our tax incentives. They may hire a few people in Jackson for a few weeks while they are in production, but most of them are bringing in crews because we don’t have the workforce here,” Essence says.

“(This) means when they yell ‘wrap,’ the city of Jackson is still left without the workforce and community of filmmakers here. It doesn’t really change what is happening in our city.”

By starting a Jackson-based production company, the Odomes hope to give aspiring actors and other Mississippians pursuing careers in film and television a means of using their skills without needing to leave the state.

“I always felt that there was so much talent here in Mississippi, and I felt so much frustration that I had to leave my family and the place that I know as home just to find opportunity,” Essence says.

Since forming the company, the Odomes have begun producing a pilot for a television series titled “Love Never Fails.” Modeled after Essence’s life, the script tells the story of a Black teenager growing up in Jackson, Miss., and struggling to find balance while pursuing her dreams and avoiding the pitfalls that she watches her own parents face.

Approximately 60% of the cast and crew used for the pilot call the Jackson metropolitan area home.

The power couple is also opening The Chosen Studios, an 8,000-square-foot facility on Northside Drive. Once complete, the space will feature a 5,000-square-foot soundstage with equipment, production offices, and rooms for wardrobe, hair and makeup. Their goal is to create a one-stop shop that can handle production from beginning to end, and they hope the first major production is their own.

“If all goes well and as we plan, then there will be a major television series about Jackson, Miss., shooting in Jackson, Miss., over the next few years,” Essence concludes.

To learn more about opportunities to become involved with The Chosen Productions, email Brand Manager Bianca Tatum at [email protected].