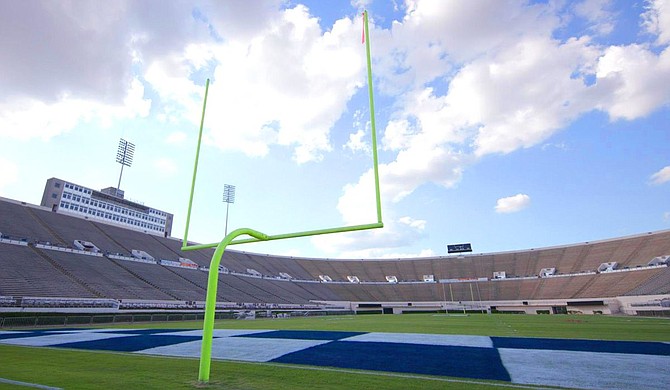 In April of this year, state lawmakers have proposed the possibility of Jackson State University building a new stadium to replace the Veterans Memorial Stadium, which the Historically Black University has owned for a decade. Photo courtesy JSU

The Veterans Memorial Stadium in Jackson is an outdoor venue originally built in 1950 and later expanded in 1980. Fit for the finest of athletes, the huge facility presently has a seating capacity of 60,492.

The Jackson State University Tigers have owned the stadium since Gov. Haley Barbour signed the bill on July 1, 2011, bequeathing it to the Tigers from the Department of Finance and Business. This is the 10-year anniversary of the flagship university acquiring ownership of the stadium.

Veteran San Francisco 49ers wide receiver Jerry Rice boasts a number of game-play records, such as a single game with 294 yards and five touchdown catches against Kentucky, showcasing his talent as a senior. He lost that Sunday to Alcorn with his team, the Devils, scoring 28 to the Braves’ 42. This game has been referred to as one of the most significant ballgames in not only in Southwestern Athletic Conference history but in football history as a whole.

In April 2021 state lawmakers allocated $250,000 for a feasibility study regarding the possibility of the Tigers building their own stadium. The distance between this Historically Black University and the Veterans Memorial Stadium is four miles.

Having lived in Birmingham, Ala., I find it impressive how the University of Alabama sprawls across downtown, making it easy to walk miles across campus in the urban area. The city of Oxford, home of the University of Mississippi, is centered around the school. When you pass through Tuscaloosa, Ala., you are in Roll Tide country throughout the drive along Interstate 20 from Jackson going east.

“I’ve been to all of the HBCUs, and even though that stadium is a hand-me-down, it is the best in all of SWAC,” a friend who is an alumnus of JSU told me.

Another buddy stated: “A new stadium at the Metrocenter has ample parking, great access, and will revitalize west Jackson. It is close enough to campus to run buses for students and charge campus parking. So much upside it’s ridiculous.”

Even my aging mother wonders whether such a change would be warranted, positing, “Shouldn’t the stadium be on the campus like other schools? That’s a hard one. Where would you build it? There are so many questions you have to ask.”

Football is a contact sport. In addition to the ever-present risk of life-threatening injuries, our recent COVID-19 experience suggests a facility big enough to maintain social distancing is important.

The University of Mississippi Medical Center is the only hospital in the Magnolia State designated as a Level-1 trauma center, and with the stadium across the street, the team has access to health care, which can be a game-changer.

Many have expressed concern over UMMC not having the room it needs to expand. In 2013, the construction crew ran into a roadblock while building. At the site where the Mississippi State Asylum operated from 1855 to 1935, research would reveal that bodies were buried on a hill where the crews were digging.

Since this discovery, expansion of the massive health-care facility, including its parking needs, has been limited to moving toward I-55, but there is no more room to do so. Razing of the stadium, however, would give ample space for expansion.

At present, I cast my vote toward keeping the stadium where it is because four miles is not too far from the main campus, parking is sufficient, and the space is sizable enough to accommodate fans.

However, I recognize that if there are players like Jerry Rice, Steve McNair and Walter Payton, 60,000 or more spectators will come regardless of the location.

Where do you stand on where Tiger fans fill the stands?

Se’lika Maria Sweet is a family physician and writer who published “The Bitter Southerner” and “Kings River Life.” She is an eighth-generation Mississippian who enjoys researching and writing about regional history and who is currently writing a history of Flint Goodridge Hospital in New Orleans.