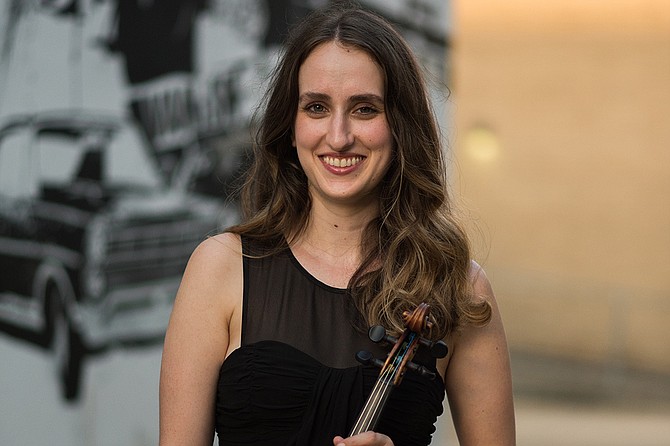 Shellie Brown Kemp was raised in Jackson, Miss., and returned to her hometown to pursue her musical career, which led to her recent appointment as the Mississippi Symphony Orchestra’s concertmistress. Photo courtesy Belhaven University

As a little girl growing up in Jackson, Miss., Shellie Brown Kemp loved to attend her older sister Bonnie’s violin lessons. “I heard her play all the time,” she recalls. “I really wanted to play because I looked up to her and I loved how it sounded.”

Kemp’s parents finally acquiesced and enrolled their younger daughter in violin lessons as well, and many of those early teachers were involved in the Mississippi Symphony Orchestra. “I participated in the youth orchestra, which was put on by (MSO),” Kemp says.

When she wasn’t performing with other young musicians, Kemp busied herself by taking private lessons with Song Xie, a professor of music at Belhaven University. When she approached an age when she began to have thoughts of college, Kemp’s beloved “Mr. Song” encouraged his young pupil to consider attending Belhaven.

“They had a great student orchestra in place,” Kemp says. “(Xie) was really proactive in teaching a lot of students and then getting them to play in that orchestra. It’s a pre-college program, almost, since he allows younger students to play and participate.”

Eventually, Xie’s pitches won Kemp over, and she enrolled at Belhaven to continue her music education. “I felt immersed in that community, and I felt really productive there,” Kemp says of her time at the private college in downtown Jackson. “I felt like it was the best place, not only for his instruction but for the community and it being so close to home.”

Her proximity to the capital city allowed Kemp to continue her involvement with the Mississippi Symphony Orchestra, and by her junior year of college, she was serving as substitute violinist for the group. Once she graduated from Belhaven in 2012, she felt ready to audition for a spot of her own.

Kemp won a seat as a violinist right away, though she says that her initial time in the MSO was short-lived. “I played for two years as a member before going to get my master’s degree,” Kemp says. “But still, sometimes I would come home and sub for them during breaks or whenever I was home for Christmas.”

Her pursuit of higher education led Kemp to Rice University in Houston, Texas, which she describes as an eye-opening experience. “There’s every kind of music ensemble happening; there’s gigs and orchestras,” Kemp remarks. “There’s all kinds of different genres and cool new venues to play them in.” But despite this wide variety of musical opportunities in Space City, Kemp missed the City with Soul.

“It was inspiring, but people were already doing all that there,” Kemp reflects. “I thought to myself, ‘It would be so cool to do that in Jackson, where it’s not happening yet.’” Kemp, who had recently tied the knot with a fellow musician, moved back to her hometown, and the pair wasted no time in kickstarting “NEW JXN,” a collaborative music group.

“We have a composer in our group, and we perform with singer-songwriters,” Kemp says of NEW JXN. “We accompany them with acoustic instruments, and we write arrangements to match their music. We want to do more of it, but we have our own jobs, so it’s crazy.”

One of Kemp’s new jobs is a notable one, as she was recently named concertmistress of the Mississippi Symphony Orchestra, a coveted position that she landed after the group launched a nationwide search after its regular concertmaster elected to take a yearlong sabbatical. Kemp joined dozens of hopefuls from across the country in applying for an audition.

MSO granted Kemp an initial audition, which she says was an unusual experience in and of itself. “You play from a list of excerpts which you have to perform behind a screen, with the panel (of judges) on one side,” Kemp observes. “The conductor is there, and so are other principal string players.”

Surviving this early elimination round, Kemp went on to play twice more, finally becoming able to reveal her identity at her third and final audition. “It’s really demanding,” Kemp says of the lengthy audition process. “They may pick one person or not anybody at all, so I’m really glad for the opportunity.”

The newly minted concertmistress didn’t have much time to congratulate herself on emerging victorious from the arduous audition process, as the MSO’s first rehearsal was just a week after her appointment. “I treated myself to lunch, and then I started looking at the music,” Kemp says with a laugh.

Some of the music that Kemp has her eye on is the upcoming “Star Wars” concert in February. “The music is awesome,” she enthuses. “John Williams is an incredible composer, and that music in particular is a huge work for the orchestra and is fun to play.”

Concerts like the Star Wars-themed show and others scattered throughout the 2021-2022 season will keep Kemp on her toes, as her duties are vital during practice and last long after it ends. “I try to facilitate what the conductor is doing and help everyone—especially in the string section—to play in a unified way according to what the conductor wants,” she says.

“The Mississippi Symphony Orchestra has around 50 to 60 people, and if there are any changes in the music, one of my big jobs is to be over the bowings,” Kemp says. “All the bows have to be going in the same direction. Marks (on the sheet music) tell us what to do, but there can be a mistake or we can just not be together. Whatever I can do to be communicative as a leader, I try to do as much as possible.”

Outside of MSO’s regularly scheduled public performances, Kemp stays busy with the group’s involvement with shows at area public schools. “That’s a big part of what we do,” she comments. “Music in the schools is really why professional music exists.” Kemp cites the public schoolers’ enthusiasm during such concerts as a highlight of her year as concertmistress, saying, “They’re such a great audience. They’re excited, and they clap along. It’s cool to see where the spark starts.”

Although her appointment is only for a single year, Kemp is hopeful that the lessons that she’ll learn this season will follow her musical career for a long time to come. “I trust the process,” Kemp concludes. “I’m happy making music here. (MSO) is such a great asset to the city, and I’m honored to have the support I have.”

For more information on the Mississippi Symphony Orchestra or its upcoming performances, visit msorchestra.com. To learn more about NEW JXN, visit newjxn.com or find the group on Facebook, Instagram or YouTube.