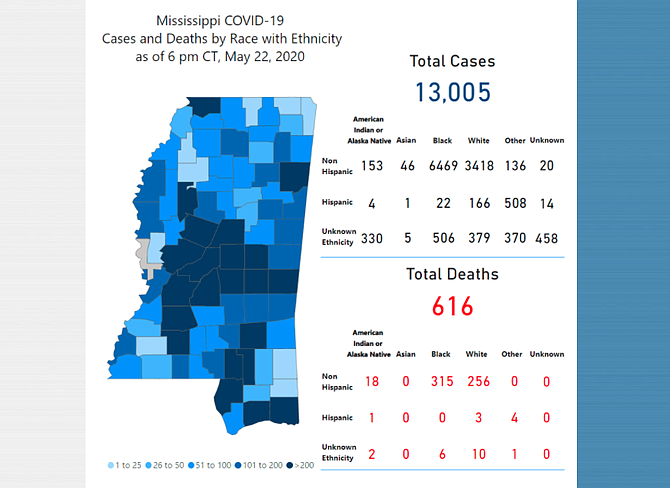 After two near-record days of new reported cases of COVID-19, the total number of cases in Mississippi since the outbreak began has topped 13,000, with 381 new cases and 20 additional deaths reported as of 6 p.m. Friday.

The average daily rate of new infections over the past seven days has increased to 269, up from 249 last week. The average the previous week was 277.

When he began the process of allowing non-essential businesses to open at the beginning of May, Gov. Tate Reeves said he expected that Mississippi would see a "plateau" of cases. Since that time, more and more people have left their homes for work, shopping, personal services and dining.

The number of people who have died from COVID-19 stands at 616, with 20 deaths reported on Saturday by the Mississippi State Department of Health. Those include people MSDH identified from death certificates dated between May 7 and May 16.

Statewide, that's a 3.75% fatality rate since the outbreak began.

MSDH is also reporting that 93 people are on ventilators in the state, the highest number since April 29. The number of patients who currently have an infection is 433, down from a high of 462 two days ago, and 154 people were in intensive care as of Friday at 6 p.m.