OPINION: What Side Are You On? Racism Is Dividing Nation Along Line of Morality | Jackson Free Press | Jackson, MS

OPINION: What Side Are You On? Racism Is Dividing Nation Along Line of Morality 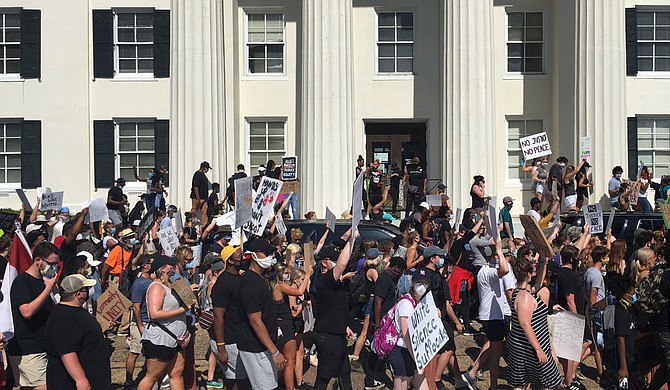 "When we put our fist in the air, it's not to threaten anyone. It's to celebrate Black people, our pride and where we came from to get to where we are now." Photo by Kristin Brenemen

This election year will force America to choose between two very different ideas. What side are you on? Yes, America, there are two sides. We have arrived at the inevitable clash of different ideas and visions for the future of this country.

You're not surprised, are you? I think we all knew this was coming eventually. The past four years have forced the monster that we know as racism to resurface, and it has created a deep chasm in America. It has divided us along the line of morality.

On one side of the line, there are people that are so afraid to lose power that they will champion outdated rhetoric to try to keep control. They have fashioned their party after Nazism, brandishing images, and speaking language that is hateful and divisive.

They cling to the Confederate symbol even though it's a symbol of bigotry, racism and hatred. They proudly wave the Mississippi State Flag as one final act of rebellion, and they buck against nationwide norms that have told them it is impossible for the state to progress under that symbol.

They tell us that we should stay in our place. They shout that we don't have the right to speak out against the inequality that we face from police. They try to hold us down figuratively and even literally, as in the case of George Floyd. With their knees on our necks, they ignore us as we ask for justice.

They beat us, choke us with gas, and they shoot rubber at us to make us stay silent. They bring out soldiers to rob us of our right to protest against the inequality that we face.

The Other Side: A Multiracial Coalition Willing to Put Selves At Risk

On the other side of the line, we see a multiracial coalition that is willing to put themselves at risk for Black Americans. They speak, they shout, they chant, they march. They kneel in solidarity with us and with our champions such as Colin Kaepernick, a man who has sacrificed everything to fight for justice.

They walk with us, regardless of facing backlash from police and political leaders who are trying to keep us trapped in a societal prison because they are afraid of our advancement. They join us as allies, willing to listen and learn the Black struggle, and what it means to be Black in America.

Our current political and societal climate has drawn a very clear line and separated us into these two sides. One side is fighting for justice and equality for Black Americans, and the other side is trying to take away the rights of Black Americans for no reason other than the color of our skin.

Sixty-five years after the death of Emmett Till, we still face injustice and inequality, even though we have contributed so much to this country.

Black culture is an actual gold mine for American society. We have defined America from the beginning.

Our music has been the soundtrack to America's rich history, from jazz to rock to pop. We have been a constant underclass and yet, our soul still shines bright because we have never ever been defeated. And yet, with everything that we have contributed to America, we still aren't treated fairly.

What Side Will You Be On?

When we put our fist in the air, it's not to threaten anyone. It's to celebrate Black people, our pride and where we came from to get to where we are now.

When we kneel, we are accused of disrespecting the flag. But it's not disrespectful. We kneel because it's hard for us to stand for a flag that still doesn't represent freedom and justice for all.

And if we want to talk about flags, then why is the Confederate symbol allowed to remain in the Mississippi flag? The Confederate flag has been used time and again by hate groups to victimize Black people. Even the United States Marine Corps has banned symbols of the Confederacy from their ranks.

So here we are at an unprecedented time in American history, where we have two clear ideas that are battling for the soul of this country. I honestly can't think of a better time for this. What better time to champion and gather support for ideas than in an election year? We will have the opportunity to solve our crisis at the ballot box. We will have a chance to pick which side we're going to be on.

It's time for us all to stand up and be counted. I'll tell you where you can find me. I'm going to be on the side that believes that every human being deserves to have justice and equality.

What side will you be on?

Duvalier Malone is the author of "Those Who Give A Damn: A Manual for Making a Difference," a motivational speaker, a community activist who has organized numerous of rallies to attempt to bring down the Confederate flag in Mississippi, and CEO of Duvalier Malone Enterprises, a global consulting firm. He lives in Washington, D.C.