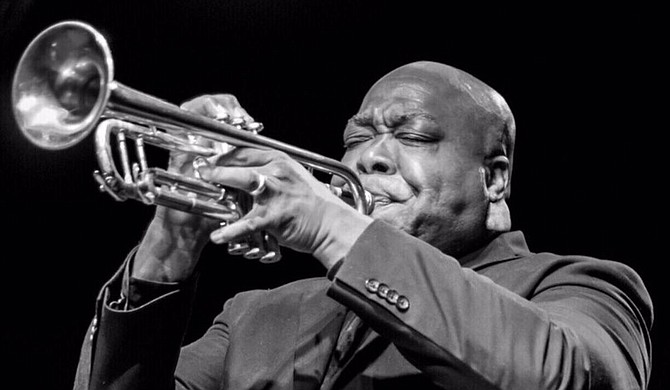 Kimble Funchess often plays in the metro as a member of the Jackson Horns when he is not instructing young musicians at Yazoo City High. Photo courtesy Valerie Crancer

Kimble Funchess lifts his arms and young musicians, seated side-by-side in arched rows, position their instruments. With the drop of his hands, the band begins playing. The Yazoo County High School's band director smiles as the melodies reverberate through the room.

Funchess, a member of the Jackson Horns, began the school's music program in 2014 with a group of sixth graders who had never before held an instrument. Within three years, he had established a competition-ready program, an accomplishment befitting a man who has spent much of his life engulfed in music.

Discovering music in elementary school, the fifth grader, inspired by Louis Armstrong, convinced his parents to allow him to join the band program.

"I remember seeing (him) on a television show, and he was playing his trumpet. After he played his last note, he opened his arms, threw his head back and (did) that laugh that everybody knows him for," Funchess said.

"When I saw how they responded to him, I knew that was something that I wanted to do. Whatever he was sharing with the world and whatever he was getting back, I wanted that."

The Crystal Springs native mastered the same horn as Armstrong, the trumpet. He played in his school band throughout middle and high school and continue to do so as a student at Jackson State University.

The musician took a hiatus from JSU to tour with blues legend Johnny Taylor. Playing with the Taylormade Orchestra opened numerous professional doors for Funchess, including opportunities to perform on studio recordings for local music companies with artists like Willie Clayton and Denise LaSalle. Funchess was also often hired to help complete the tour band when groups such as The Temptations performed in the area.

However, the dream of teaching music lingered, so he returned to Jackson State University and earned his bachelor's and master's degrees in music education.

The 12-year educator, who also holds a master's degree in school counseling, has created a program called "Mindfulness Through Music." The program combines music and counseling techniques to improve classroom behaviors. It offers professional development for teachers on how to use music to increase skills such as focus, relaxation and following directions for students.

Funchess, who continues to play professionally with the Jackson Horns in the metro area, hopes that his students will see the diverse possibilities that music offers.

"We want our students the opportunities to be in the education side of music in the classroom or to know that they can perform at churches (or) professionally," Funchess says. "There are tons of jobs out there where people had their initial start in music."