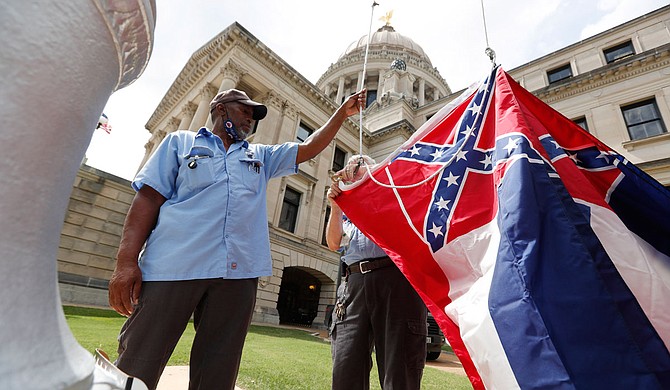 Mississippi Department of Finance and Administration employees Willie Townsend, left, and Joe Brown, attach a Mississippi state flag to the harness before raising it over the Capitol grounds in Jackson, Miss., Tuesday, June 30, 2020. The two men raised about 100 flags, provided by the Secretary of State's office, for people or organizations that purchased a state flag that flew over the grounds. Gov. Tate Reeves will sign a bill Tuesday evening retiring the last state flag with the Confederate battle emblem during a ceremony at the Governor's Mansion. Upon the governor signing the bill, the flag will lose its official status. Photo courtesy Rogelio V. Solis via AP

JACKSON, Miss. (AP) — With a stroke of the governor’s pen, Mississippi is retiring the last state flag in the U.S. with the Confederate battle emblem—a symbol that’s widely condemned as racist.

Republican Gov. Tate Reeves signed the historic bill Tuesday at the Governor's Mansion, immediately removing official status for the 126-year-old banner that has been a source of division for generations.

“This is not a political moment to me but a solemn occasion to lead our Mississippi family to come together, to be reconciled and to move on," Reeves said on live TV just before the signing. “We are a resilient people defined by our hospitality. We are a people of great faith. Now, more than ever, we must lean on that faith, put our divisions behind us, and unite for a greater good.”

Mississippi has faced increasing pressure to change its flag since protests against racial injustice have focused attention on Confederate symbols in recent weeks.

A broad coalition of legislators on Sunday passed the landmark legislation to change the flag, capping a weekend of emotional debate and decades of effort by Black lawmakers and others who see the rebel emblem as a symbol of hatred.

Among the small group of dignitaries witnessing the bill signing were Reuben Anderson, who was the first African American justice on the Mississippi Supreme Court, serving from 1985 to 1991; Willie Simmons, a current state Transportation Commissioner who is the first African American elected to that job; and Reena Evers-Everette, daughter of civil rights icons Medgar and Myrlie Evers.

Medgar Evers, a Mississippi NAACP leader, was assassinated in the family's driveway in 1963. Myrlie Evers was national chairwoman of the NAACP in the mid-1990s and is still living.

“That Confederate symbol is not who Mississippi is now. It’s not what it was in 1894, either, inclusive of all Mississippians,” Evers-Everette said after the ceremony. "But now we’re going to a place of total inclusion and unity with our hearts along with our thoughts and in our actions.”

Reeves used several pens to sign the bill. As he completed the process, a cheer could be heard from people outside the Governor's Mansion who were watching the livestream broadcast on their phones. Reeves handed the pens to lawmakers and others who had worked on the issue.

The Confederate battle emblem has a red field topped by a blue X with 13 white stars. White supremacist legislators put it on the upper-left corner of the Mississippi flag in 1894, as white people were squelching political power that African Americans had gained after the Civil War.

Critics have said for generations that it’s wrong for a state where 38% of the people are Black to have a flag marked by the Confederacy, particularly since the Ku Klux Klan and other hate groups have used the symbol to promote racist agendas.

Mississippi voters chose to keep the flag in a 2001 statewide election, with supporters saying they saw it as a symbol of Southern heritage. But since then, a growing number of cities and all the state’s public universities have abandoned it.

Several Black legislators, and a few white ones, kept pushing for years to change it. After a white gunman who had posed with the Confederate flag killed Black worshipers at a South Carolina church in 2015, Mississippi’s Republican speaker of the House, Philip Gunn, said his religious faith compelled him to say that Mississippi must purge the symbol from its flag.

The issue was still broadly considered too volatile for legislators to touch, until the police custody death of an African American man in Minneapolis, George Floyd, set off weeks of sustained protests against racial injustice, followed by calls to take down Confederate symbols.

A groundswell of young activists, college athletes and leaders from business, religion, education and sports called on Mississippi to make this change, finally providing the momentum for legislators to vote.

Before the bill signing Tuesday, state employees raised and lowered several of the flags on a pole outside the Capitol. The secretary of state's office sells flags for $20 each, and a spokeswoman said there has been a recent increase in requests.

During recent news conferences, Reeves refused to say whether he thought the Confederate-themed flag properly represents present-day Mississippi, sticking to a position he ran on last year, when he promised that if the flag design was going to be reconsidered, it would be done in another statewide election.

Now, a commission will design a new flag that cannot include the Confederate symbol and must have the words “In God We Trust.” Voters will be asked to approve it in the Nov. 3 election. If they reject it, the commission will draft a different design using the same guidelines, to be sent to voters later.

Reeves said before signing over the flag's demise, “We are all Mississippians and we must all come together. What better way to do that than include ‘In God We Trust’ on our new state banner."

He added: “The people of Mississippi, black and white, and young and old, can be proud of a banner that puts our faith front and center. We can unite under it. We can move forward — together."

Read the JFP full archive on the Mississippi Flag and facts and myths about the Confederacy at jfp.ms/confeds.