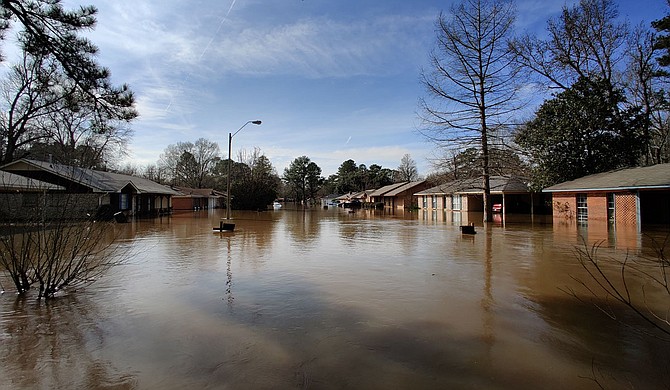 The Pearl River flood affects over 500 homes in the Greater Jackson area, driving residents from their homes for what may be a long evacuation. Emergency responders stressed the danger of even low flood waters. Photo by Nick Judin

As Major Dale Bell guided airboat driver Trent Myers through flooded sections of northeast Jackson Monday, he pointed out swarming balls of fire ants, bobbing through the flood, buoyed by high surface tension. Fire ants are the least of the dangerous fauna that commonly hide in floodwaters. Rats, snakes and alligators may lurk below the surface.

Bell, commander of the Mississippi Department of Wildlife, Fisheries and Parks' Special Response Team, says the damage is extensive and that residents should be prepared to remain out of their homes for an extended period. "Approximately 500 homes were affected," he told the Jackson Free Press. "These were homes that were not necessarily inundated, but have anywhere from two to 30 inches of water inside."

The major stressed the countless dangers lying beneath the waters. "Open manhole covers, drains and culverts draw in strong currents," Bell warned. Even adults could easily drown in such conditions. Beyond that, Bell said, the water is a stew of chemicals and tainted sewage. Even barely exposed skin should be cleaned thoroughly if it comes into contact with flood water.

Jeffrey Lewis, proprietor of the Mississippi Basketball & Athletics center, one of the buildings the flood waters currently surround in northeast Jackson, waited at the barricade for news of his business' condition. He fears the temporary loss of the social services his business provides local children. "This is a haven for them. We have an after-school care team, an enrichment program," he said in an interview.

Jackson residents like Lewis watched as their homes sunk into murky flood waters that billowed from the Pearl River on Monday. Some were anxious, some hopeful, with all eyes on the cresting waters. Beyond the police barricades, the roads became a web of rivers, soccer fields and parks turned into lakes. Swirling eddies and rapid currents formed in narrow lanes and neighborhoods.

The Pearl River crested Monday at 36.8 feet, inundating the City of Jackson with quickly creeping floodwaters. The waters reached a lower high-water mark than the worst-case scenario forecast of 38 feet, but roughly 500 homes near the river flooded, including large parts of northeast Jackson.

The lower-than-expected crest of the Pearl may have delivered Lewis' building from total inundation. But long-term damage is impossible to assess at this juncture. Lewis, for his part, is worried for every day his kids lose the community and after-school care his athletic center provides.

Mandatory evacuations, which Mayor Chokwe A. Lumumba issued last week, cleared the homes in projected flood zones of most residents. Around 30 of those evacuees took shelter at the Red Cross-run shelter at the police training academy on 3000 St. Charles St., which remains open with long-term accommodations and food.

Gov. Tate Reeves held a press conference Monday morning, sharing the news of the Pearl's crest and updating the public on the actions of the emergency response teams. "To date, we have performed 16 assisted evacuations throughout this situation." Reeves celebrated that no reports of injuries or deaths resulting from the disaster had surfaced.

Some Jackson residents found a moment of togetherness even after the flood drove them out of their homes. Wilner Hubbard and Barbara Beavers stood close together at the edge of Harrow Drive, watching the water roll in. Their homes were in the flood zone, but they smiled, hugging and thanking Jesus for the timely evacuations and absence of injuries.

If Bell and his team were exhausted after their long patrol of the flood zone, they did not show it Monday evening. They have been putting in long shifts during the disaster and will continue to do so as long as Jackson requires it.

Bell expressed concerns about the coming rains, saying they would complicate efforts to return residents to their homes. "With this front that's actively upon us right now, it's very hard to say. We're pretty positive that this flooding that we have will be (receded) by Friday," he said.

But making homes safe for residents may take significantly longer than that. Bell stressed that patrols would continue, in part to discourage looting of abandoned homes. "We just ask the public to be patient with us while we make things safe for their return," he said.

For now, Hubbard and Beavers are content to wait. Hubbard is optimistic, come what may. She held her neighbor close, both smiling even in the face of their sunken neighborhood. "Something good's gonna come out of these waters," she said.