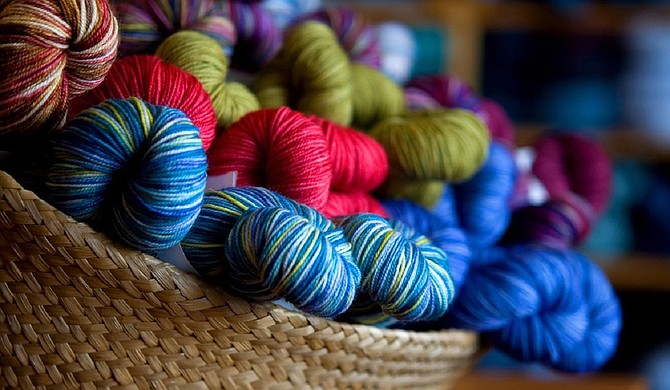 Judy McNeil, the owner and manager of The Knit Studio, has recently entered her 13th year in service to local creatives. Setting up shop in Jackson was an easy choice for McNeil, who notes that the Jackson area already housed an established community of knitters and crocheters when her storefront opened in 2007.

This sentiment particularly rang true given her long personal history in the profession. "I'm self-taught, but for me, it was more than a hobby—it was a passion," she says.

Operating The Knit Studio has allowed McNeil to tap into that passion by making beautiful things from unfinished fabrics, and it has also allowed her to help her customers pursue their own creative projects.

Some of these customers are novices, just beginning their foray into the crafting world, while others are more seasoned artisans, with distinct ideas about patterns and materials. Regardless of their preference, McNeil seeks to keep something in-store to help them along their journey, noting that the shop "carries everything from the most basic yarn for beginners all the way to hand-dyed yarn for those who have graduated into using more exquisite yarn."

Among these finer offerings are cashmere, silk and mohair, which all come in handy for customers aiming to make something special.

Valuing her experience and know-how, Knitters and crocheters across the spectrum come to McNeil for help with particularly tricky projects. "I never coveted my knowledge. If I could help, I would—but I'm the first to admit when I don't know," she quips.

The shop owner enjoys her work, even the more challenging projects. "It keeps me on my toes," McNeil remarks. "Reading patterns is almost like a second language. You always have it with you; you don't have to open a book every time someone has a problem."

Issues sometimes seemingly resolve themselves, though, once customers enter the shop, housed in Canton Mart Square in north Jackson.

"They'd think they had a problem with their knitting, but when they sat in the store, it was all right," McNeil recalls. The atmosphere fosters this sense of resolution and release that McNeil strives to create in her store. "Before COVID, we had a lot more socializing happening. We had several days that were known as 'social knitting days.'"

These "social knitting days" allowed customers to bring their knitting and their woes into The Knit Studio. "Everyone's story is interesting," McNeil says of the practice. "Many of the stories they told were absorbed by the fabric, which may sound silly, but it gives life to the yarn. It's like having friends come to your house—people tend to be a little more themselves."

For McNeil, this is an aspect of the business that she never expected but treasures all the same. "For me, success isn't in the projects. It's in how many people were initially customers but became friends. Those are the things that resonate, and that's in life, not just in business. It's the thing that makes it all worthwhile," she says.

To learn more about The Knit Studio or to make an online order, visit theknitstudio.com.