Mississippi Leaders in Both Parties Urge Federal Action on Floods 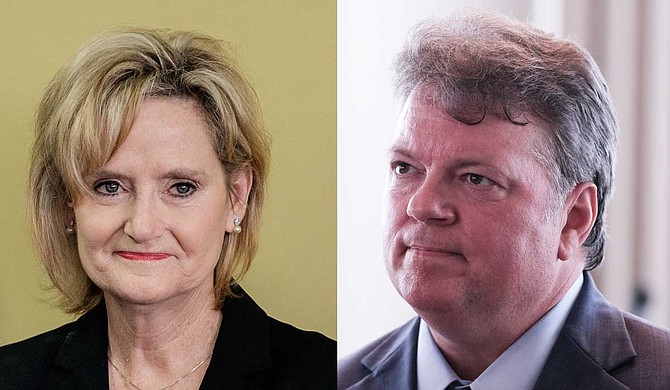 In a speech May 9 on the U.S. Senate floor, Republican Sen. Cindy Hyde-Smith (left) of Mississippi said the federal government should complete a massive pump project that's designed to help drain water from the confluence of the Yazoo and Mississippi Rivers. The state's Democratic attorney general, Jim Hood (right), has expressed concerns about how federal flood management projects are affecting the Mississippi Gulf Coast. Photo by Ashton Pittman.

JACKSON, Miss. (AP) — Political discussions about water policy in Mississippi have long focused on concerns about how to control flooding and let people earn a living without creating environmental harm.

Few people who lived through the great Mississippi River flood of 1927 are still around, but their recollections of hardship have been passed down through generations.

And there's no need to look to the past to find the misery of longterm flooding: Thousands of acres have been underwater for months in the Mississippi Delta and could remain that way well into the summer, so some farmers won't be able to plant corn and soybeans.

Along the Gulf Coast, biologists and fishermen alike are concerned about how the saltwater ecology has been affected by freshwater flowing into the Mississippi Sound since the opening of a spillway that helps protect New Orleans from flooding.

Western states limit water use during droughts. Alabama, Georgia, and Florida have engaged in a long legal battle over who has rights to water from rivers. Places like Flint, Michigan, have made national headlines with dangerous drinking water.

In Mississippi this year, concerns about flood control are intensifying because of what's happening in the Delta and on the coast.

Democrats and Republicans alike are talking about water.

In a speech May 9 on the U.S. Senate floor, Republican Sen. Cindy Hyde-Smith of Mississippi said the federal government should complete a massive pump project that's designed to help drain water from the confluence of the Yazoo and Mississippi Rivers.

The administration of President George W. Bush rejected the pump project amid concerns about its potential impact on wetlands and wildlife. Opponents say huge pumps could worsen flooding downstream.

The late Republican Sen. John McCain of Arizona once called the pump proposal for Mississippi "one of the worst projects ever conceived by Congress." Louie Miller, director of the Mississippi Sierra Club calls it "a special interest giveaway" and "an agricultural drainage project designed to drain wetlands so that a handful of large landowners can expand production on lands that regularly flood."

The pump proposal is supported by prominent Mississippi officials, including Gov. Phil Bryant, Lt. Gov. Tate Reeves and U.S. Sen. Roger Wicker, who are all Republicans, and U.S. Rep. Bennie Thompson, a Democrat whose district would be most affected.

The state's Democratic attorney general, Jim Hood, has expressed concerns about how federal flood management projects are affecting the Mississippi Gulf Coast. Hood last week publicly released a letter he sent to the U.S. Army Corps of Engineers about the opening of a spillway north of New Orleans.

"The opening of the Bonnet Carre Spillway on the Mississippi River by the Corps of Engineers has allowed freshwater and pollutants to flow through Lake Pontchartrain into the Mississippi Sound, killing dolphins and sea turtles and adversely impacting the seafood industry," Hood said in a statement.

Hood said he knows the Corps of Engineers is concerned about the potential for flooding around New Orleans.

"Meanwhile, our Delta farmers may not be able to plant a crop this summer," Hood said. "I want to make sure that the Corps is considering all of its options in flood management. Moreover, I want the federal government to know that the state of Mississippi intends to have it losses compensated or mitigated."