Mississippi Rep Charged With Punching Wife Could be Removed 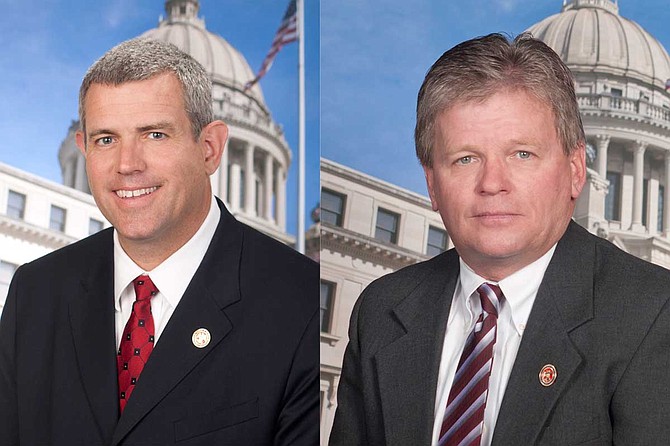 Republican Speaker Philip Gunn (left) said Friday that the House Ethics Committee will "closely monitor this case" in regard to Rep. Doug McLeod's (right) domestic violence charge against his wife.

JACKSON, Miss. (AP) — The Mississippi House speaker said Friday that he is asking lawyers to research how to remove a lawmaker if it's true that the man punched his own wife and does not resign voluntarily.

Second-term Republican Rep. Doug McLeod of Lucedale was arrested and charged with misdemeanor domestic violence after deputies were called to his home late Saturday.

George County sheriff's deputies said McLeod, 58, was drunk and bloodied his wife's nose after she didn't undress quickly enough when he wanted to have sex.

"Finally, if the allegations prove to be true, I have requested the House legal staff to research the correct process for the removal of the member if he does not voluntarily resign," Gunn said in a statement.

Section 55 of the Mississippi Constitution says each chamber of the Legislature may each "punish its members for disorderly behavior" and with a two-thirds vote may expel one of its own members.

The Legislature has already finished its work for this year and will only return to the Capitol if the governor calls them into special session.

McLeod has not responded to numerous messages from The Associated Press or other news outlets. He was released from jail by Monday on a $1,000 "signature bond," which meant he did not have to post that amount of money.

Earlier this week, Gunn, Republican Gov. Phil Bryant and Mississippi Republican Party chairman Lucien Smith all said McLeod should resign if the charge of domestic violence is true. Some Democratic lawmakers have also called for his resignation. Republicans hold a majority in the Mississippi House and Senate.

McLeod has represented George and Stone counties in south Mississippi since 2012 and is unopposed for reelection this year.

In 2017, McLeod was among the majority of legislators who voted to enact a law making domestic abuse a reason for divorce in Mississippi.