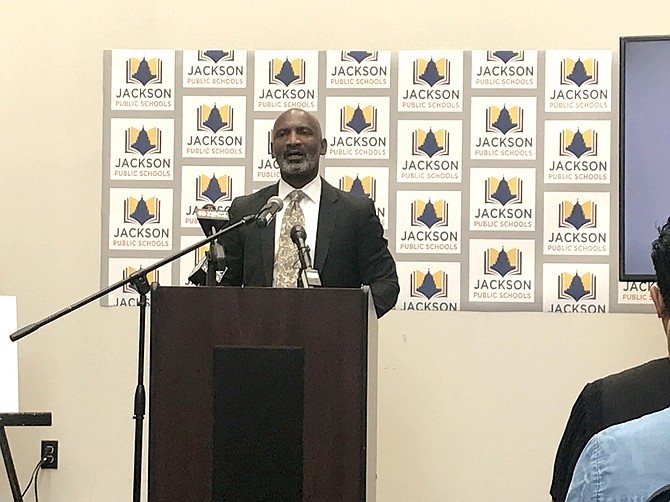 Jackson Public SchoolsSuperintendent Errick L. Greene speaks to an audience about JPS' strategic plan for the next five years at a press conference on July 19. Photo by Aliyah Veal.

Jackson Public Schools now has a plan to "transform" education in Mississippi's capital city, in part the culmination of a partnership to respond to a threatened State takeover of public schools. City leaders say it will help ensure that all children in the district get a high-quality education. It would also expand access to pre-K programs for 4-year-olds.

JPS Superintendent Errick L. Greene unveiled "Excellence For All," the new strategic plan for educating Jackson students, at a press conference inside the Smith Robertson Museum and Cultural Center on July 18, then at a community gathering at Henry Kirksey Middle School that evening. "Excellence for all folks. That's the name of the game. We're very intentional about naming our plan 'Excellence for All.' That's where we're headed," Greene said at Smith Robertson.

JPS defines Excellence For All "as a series of commitments to the scholars and families of Jackson Public Schools and will guide the district's decisions and actions over the next five years," a strategic plan booklet says.

The plan has five commitments: high-quality early learning for 4-year-olds; innovative teaching and learning; engaging educators; safe, supportive and positive learning environments; and a culture of accountability and excellence.

"At Jackson Public Schools, we (want to) prepare scholars to achieve globally, to contribute locally and to be fulfilled individually. We believe it is important to address each of those and that they (students) will be prepared to do it," Greene said.

The booklet also includes milestones that the school district hopes to reach by 2024. Some of these goals include having 40% or more JPS students performing at Level 4 or 5 in reading and math for third- through eighth-graders and for high school end-of-course exams; 80% or more students graduating in four years; and 10% or fewer students getting suspension per school year.

As far as when residents can expect to see results from the plan, Greene said people should not expect for every piece of the plan to be in place by August.

"We know that all of this work cannot happen right off," he said. "But each year we'll identify specific goals that we believe we'll achieve, (and) that's how we'll ensure that there is clarity on exactly what we're focusing on that year and how we'll be able to show progress is made."

Greene also said that the school district is working hard to not be a burden on the city as far as the budget is concerned.

"We have identified a list of partners who have already started to identify some additional resources to support us in some of the big initiatives we have," he said. "... This is the JPS plan. This is the Jackson plan. This is a plan that will ensure every child experiences excellence."

The Better Together Commission, an independent group of citizens, spearheaded the efforts. The commission began its work in 2017 after Jackson Mayor Chokwe A. Lumumba and Gov. Phil Bryant entered into a memorandum of understanding between JPS and the W.K. Kellogg Foundation in order to avoid a state takeover of the struggling school system.

Lumumba praised the plan in a press release Friday morning.

"We all agree that we have an opportunity for a transformational school district and that Jackson needs to be the light of intellectual capital for our state and country," Lumumba said. "The citizens also have played the most critical role in this endeavor because we know that while we can bring in individuals with an understanding of policy and curriculum, that none of this would be successful without the buy-in from our parents and our children."

Bryant praised the plan in a statement on Friday.

"I am grateful for the individuals serving on the Better Together Commission and their accomplishments in helping identify qualified leadership and commissioning an assessment of the Jackson Public School District," Bryant said. "The dedicated work of the commission has culminated in a five-year strategic plan that will help achieve sustainable change and improved outcomes for children."