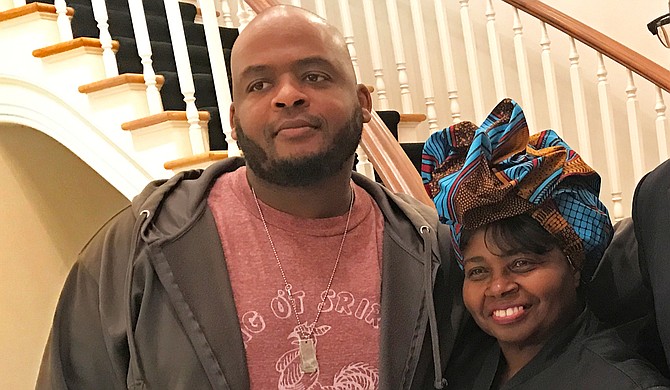 Author Kiese Laymon (left), whose memoir "Heavy" was one of last year's most acclaimed works, has won the Andrew Carnegie Medal for Excellence. He is pictured here with his aunt, Carolyn Coleman (right). Photo by Ko Bragg

Author Kiese Laymon, suspended from college for taking out a library book without permission, can assume he's been forgiven by the library community.

Laymon, whose memoir "Heavy" was one of last year's most acclaimed works, has won the Andrew Carnegie Medal for Excellence. The award, announced Sunday, comes with a cash prize of $5,000. It is presented by the American Library Association.

"I can laugh about it now, but it took me two decades to be able to talk about it," said Laymon, who in "Heavy" writes bluntly of his troubled childhood in Mississippi.

"It was the most shameful time of my life, especially if you're a black boy in Mississippi and you're always taught that education is the way out."

Laymon received the Carnegie medal for nonfiction, and Rebecca Makkai the medal for fiction for her novel "The Great Believers," which looks back on the AIDS epidemic of the 1980s. Makkai, a National Book Award finalist last fall, recalled spending enough time at Illinois' Lake Bluff Public Library that she could probably find the shelf with Lois Lowry's books "blindfolded."

Libraries have shaped her reading, and writing. She based part of her debut novel, "The Borrower," in a library. For "The Great Believers," her research included looking through old periodicals at Chicago's Harold Washington Library Center.

"I read every back issue of the Windy City Times (Chicago's biggest gay weekly) from 1985 to 1992, as well as other LGBTQ publications from the late 80s," she wrote in a recent email. "While I was there, I wound up looking through sources like Gourmet Magazine and Chicago Magazine as well, to remind myself, for instance, what people would have eaten for a fancy dinner out in 1986. Sometimes just a single ad could evoke a whole scene."

The Carnegie winners were announced during the library association's annual winter meeting, being held in Seattle. On Monday, the association will announce winners of the Newbery and Caldecott prizes, along with other top honors for children's literature.

Before getting in trouble at Mississippi's Millsaps College for failing to sign out for Stephen Crane's Civil War novel "The Red Badge of Courage" — "I did what everybody did at the time, dropped it on the floor and kicked it under the scanner," he explained — he had spent many worthwhile hours in libraries. His mother was a professor at Jackson State University and would leave him at the library while she worked.

"I've always been very, very thankful for librarians," he said. "I think the country sometimes sees them as low energy and not cutting edge, but it is something that they could look at a book like mine, which is sort of risky, and given it this award."