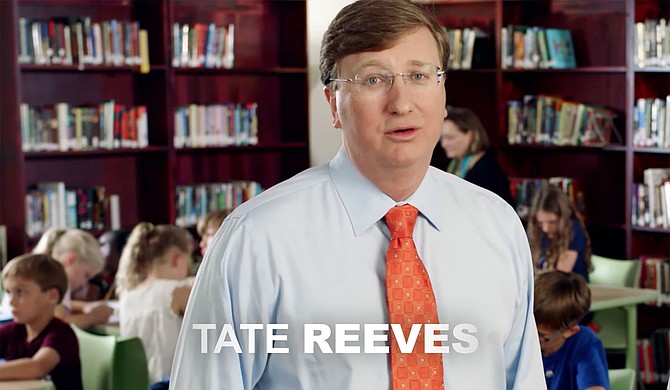 Incoming state leadership, including Gov.-elect Tate Reeves, is unified in its desire for higher teacher pay. But the scope and timeline are still up for debate. Photo courtesy Tate Reeves Campaign

Teacher pay raises could be one of the first big achievements of the 2020 legislative session, multiple lawmakers say. The optimistic forecasts follow an election year in which teacher pay was a central issue, with Gov.-elect Tate Reeves promising a $4,300 increase over the next five years.

As lieutenant governor, Reeves blocked a $4,000 pay bump over two years just last session, instead opting for a flat raise of $1,500. That increase failed to keep up with the rate of inflation since the last raise, passed in 2014. Reeves' plan would bring Mississippi in line with the surrounding states. As of the 2018-2019 school year, the National Education Association ranked Mississippi's teacher pay as the lowest in the nation.

At a press event at the state capitol Wednesday, Lt. Gov.-elect Delbert Hosemann was unequivocally positive about the potential for greater teacher pay, insisting he would aim higher than even Reeves had estimated.

Hosemann insisted that Mississippi teachers deserved the "respect" of prompt action to improve their compensation. "Why do we have to be average? Why can't we be above? I'm not held to $4,000," Hosemann told the Jackson Free Press. "When we get to a point that our teachers are not making an economic decision whether they teach or not, then I'll have gotten there."

Even the party's right flank, support for bringing teacher pay closer to the national average is strong. Mississippi Sen. Chris McDaniel, R-Ellisville, told the JFP that he roundly agreed with the anticipated raise.

"I believe it is reasonable. It's an idea that's time has come," he said.

Ready To Work: Ready or Not

Vocational training seems to be high on the list of education priorities for the upcoming session, which officially begins Jan. 8 . During his campaign, Reeves rolled out a $100-million plan for investment in career training initiatives, $75-million of which would go to "community colleges to modernize their workforce training capabilities."

Hosemann chuckled at the mandate this week, but did not preclude achieving it. "First, I gotta find the hundred million," he said. "I always love it when the governors do that to the lieutenant governors—'We need to raise a hundred million dollars!' Well, I think we can get there."

Hosemann told the Jackson Free Press that the right model can be found in parts of Mississippi that start their vocational education early in high school. "Career technical will begin, as it has in Starkville and George County ... in the 10th grade," he said. It is too late to ask a high-school senior, "What are you going to do?" he said. "So that's not gonna happen in Mississippi anymore."

Nationally, enrollment and investment in vocational training have grown steadily since the beginning of the millennium, with some studies suggesting an increase from 9.66 million students enrolled at the turn of the century to more than 16 million earlier this decade. The attractiveness of vocational training has grown alongside the rising cost—and falling utility—of traditional four-year degrees.

"These young men and women that come out of the welding class can start at $35 an hour," Hosemann said. He stressed that vocational education can assist not only with increasing labor participation, but reducing prison recidivism rates. Prisoners exiting incarceration into employment could compose up to a third of the GOP target number for workforce participation, Hosemann said. But some job-training initiatives for inmates fail to provide adequate assistance upon release and function more to generate revenue through prison labor than to actually prepare workers for stable employment post-incarceration, Prison Legal News reports.