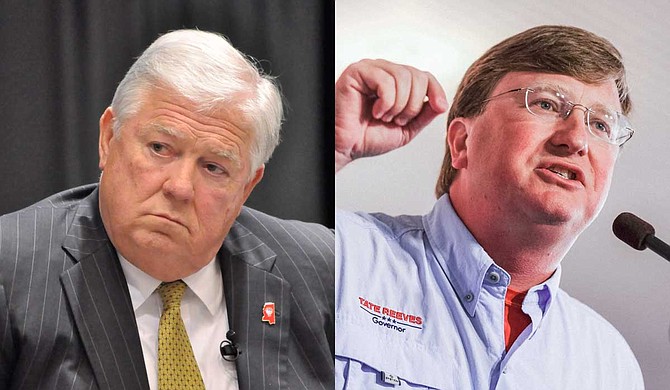 Barbour said that "two good people" are in the Aug. 27 party primary runoff. Reeves is in his second term as lieutenant governor after serving two terms as state treasurer, and Bill Waller Jr. is a retired chief justice of the Mississippi Supreme Court.

"This is not about who's a good person, who's a bad person," said Barbour, who led the Republican National Committee in the mid-1990s and was governor from 2004 to 2012. "Bill Waller's a nice guy. I worked with him as governor. I thought he was a great chief justice."

Barbour said there are significant policy differences between Reeves and Waller.

"Tate understands that government doesn't have any money except what it takes from the public," Barbour said as he stood with Reeves, current Republican Gov. Phil Bryant and several other elected officials at the state Republican Party headquarters.

Reeves repeated his opposition to increasing Mississippi's gasoline tax. Waller has said a gas tax increase would be a fair way to fund highway improvements because it would be paid by people using the roads.

"Mississippians are paying more for vehicle repair than ever before due to poor road conditions," the association's former president, Clifton L. "Pepper" Beckman Jr. of Laurel, said in a news release. "Bridges are closed across the state, which has strong negative effects on state commerce and economic development."

Reeves received about 49% and Waller received 33% in a three-person Republican primary Aug. 6.

Bryant could not seek a third term as governor. Mississippi, Louisiana and Kentucky are the only states electing governors this year.

Only the runoff candidates had to file campaign finance reports Tuesday.