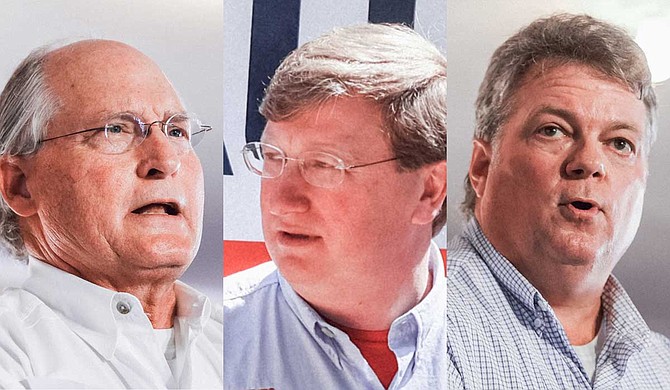 Hood hopes to break the grip Republicans have held on the governorship for 16 years in the conservative Southern state.

"People are ready for change in Mississippi. Certainly, the working folks are," Hood told The Associated Press after he won Tuesday.

Reeves missed a majority in the Republican primary despite being endorsed by Gov. Phil Bryant, who is term-limited, and raising millions more than any of his GOP rivals. But he was confident in a post-election speech at a restaurant in the Jackson suburb of Flowood, reminding his supporters that he had to win a primary runoff when he first ran for state treasurer in 2003.

Waller told supporters at his downtown Jackson campaign headquarters that his issues resonate with voters, including his push to spend more money on roads.

"The march has started, and we're going to be victorious Aug. 27," Waller said.

In addition to the Republican and Democratic nominees, the Nov. 5 ballot for governor will have a Constitution Party candidate, Bob Hickingbottom, and an independent candidate, David Singletary.

Hood said he wants to improve roads and education, reduce the state's 7% tax on groceries and work on "cleaning up the Legislature" by eliminating contracts that lawmakers have directed toward specific companies that hire big lobbying firms. He also advocates expanding Medicaid, saying the state is losing billions of federal dollars. And he says he personally opposes abortion, which has prompted criticism from some Democratic primary voters.

Adam Wells, 34, is a former teacher who's now an education consultant, said he voted for Hood.

"I think he's the only shot the Democrats have to beat Tate Reeves," Wells said at a precinct in Canton. "It will be very difficult to do that, and he's the only Democrat in the race to hold a statewide office."

Reeves has raised the most money of any candidate for Mississippi governor, and has run on a record of cutting taxes and being socially and fiscally conservative. He largely focused on Hood during the primary, ignored Waller and the other Republican in the race, first-term state Rep. Robert Foster.

Hood said voters should be wary when politicians use labels rather than talk about issues.

Reeves has portrayed Mississippi as being in good financial shape and said teachers have received raises each of the eight years he has been lieutenant governor. Waller and Foster said Mississippi's situation is not as rosy as Reeves portrays. And critics noted that a big chunk of the pay hikes have come through previously scheduled raises, and Mississippi still lags far behind national and regional averages for teacher pay.

At a polling place in Picayune, Kathy Burke, 66, said Reeves' support of President Donald Trump was a key factor in her decision.

"I like what's happening and Reeves seems to be a staunch supporter of him," Burke said.

Reeves and other top Republicans have long opposed Medicaid expansion under the Affordable Care Act, and Mississippi is among 14 states that have not chosen some sort of expansion plan. Waller and Foster both advocate a type of system Indiana used when Mike Pence was governor — seeking federal permission to let people purchase Medicaid coverage if they are considered working poor.

Waller and Foster also both say Reeves has done too little to find money to improve highways and bridges, even as Mississippi has been told that many bridges are structurally deficient.

Reeves opposes a gasoline tax increase. Waller and Foster both say they would support increasing the gas tax if the state also reduces or eliminates the state income tax. They say a gas tax is a user fee that also would be paid by out-of-state drivers who stop and fill up in Mississippi. After the state was forced to close hundreds of structurally deficient bridges in 2018, legislators met in special session and authorized the creation of a lottery to help pay for highways and bridges. Money has not started to come in, though, because lottery games won't begin until late this year.

Hood, who raised far more money than any of the other Democratic candidates for governor, would become the state's first Democratic governor since Ronnie Musgrove was defeated after a single term in 2003.

Mississippi is one of only three states electing a governor this year. Louisiana and Kentucky are the others.