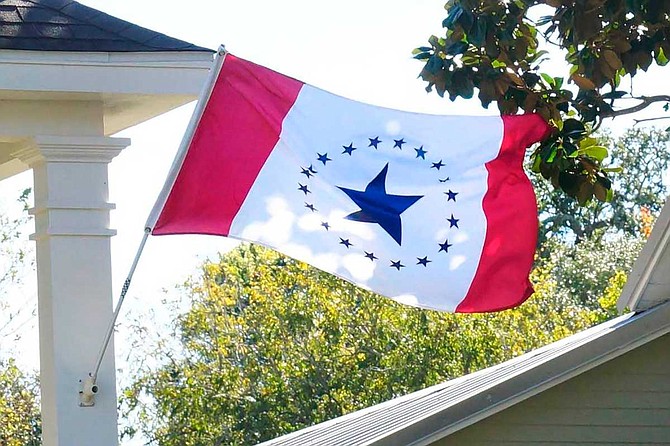 Laurin Stennis says her flag design represents unity. It has red vertical bars on each side and a white center with a large blue star encircled by 19 smaller ones, representing Mississippi as the 20th state. Photo courtesy Stennis Flag Flyers

JACKSON, Miss. (AP) — Mississippi residents who want a state flag without the Confederate battle emblem will soon be able to display one on their license plate.

Legislators have not changed the actual flag that's the last in the U.S. with the Confederate emblem, although some have pushed for the "Stennis Flag."

Stennis says her design represents unity. It has red vertical bars on each side and a white center with a large blue star encircled by 19 smaller ones, representing Mississippi as the 20th state.

She is the granddaughter of the late U.S. Sen. John C. Stennis, who served 41 years before retiring in 1989 and was a segregationist much of his career. He died in 1995.

"What is the role of a state flag? In this day and age, it is marketing and branding," Laurin Stennis, 46, told The Associated Press on Wednesday. "If any company or any corporation had a symbol that hurt its morale and its bottom line the way ours does, they'd change it immediately."

Like most specialty license plates in Mississippi, this one will cost an extra $30 a year. Most of the money will go toward operation and maintenance of the Museum of Mississippi History and the Mississippi Civil Rights Museum, which opened in 2017 in Jackson.

The Confederate emblem — a red field topped by a blue tilted cross and dotted by 13 white stars — has appeared on Mississippi's flag since 1894. Critics say it's racist; those who oppose removing it say it's a historic symbol.

Mississippians voted to keep the flag in a 2001 statewide election. However, several Mississippi cities and counties and all eight of the state's public universities have stopped flying it in recent years amid criticism that the battle emblem is a racist reminder of slavery and segregation. Supporters of the flag say it represents history.

Bryant has said that if the Mississippi flag is going to be redesigned, the matter should be decided in another statewide election. His spokesman, Knox Graham, said Bryant knew the Stennis flag design was in the license plate bill when he signed it. Graham said the museums, which will receive money from the Stennis flag tag, are a "worthy cause."

"Gov. Bryant has a high standard for vetoing legislation," Graham said. "Vanity tags do not rise to that level."

Some homes and businesses in Mississippi already fly the Stennis design instead of the state flag. The artist said she still hopes her design will eventually gain official status and replace the one with the Confederate emblem.

"Mississippians deserve a state flag that any Mississippian can fly without a moment's hesitation," Stennis said.

Confederate symbols have been widely debated across the South, particularly since June 2015, when a white supremacist killed nine black worshippers at a church in Charleston, South Carolina; and August 2017, when violence erupted as white nationalists held a rally in Charlottesville, Virginia.

For the past several years, multiple bills have been filed to redesign the Mississippi flag. More than a dozen were filed this year, and they all died when they were not considered because a committee chairman said there was no consensus among lawmakers.