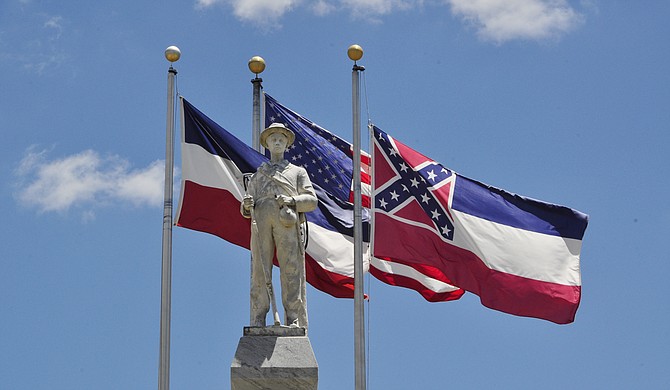 Mississippi Republican Gov. Tate Reeves said Monday that he’s against having two state flags--the current banner with the Confederate battle emblem that critics see as racist, and a yet-to-be-determined design that would erase Confederate images. File Photo by Trip Burns

“Over the weekend there has been a proposal floating amongst some in the Legislature to create a second Mississippi flag. Let’s call it the ‘Separate but Equal’ flag option,” Reeves said Monday on social media.

He said having two flags would further divide the state.

“I don’t believe it would satisfy either side of this debate, and I don’t think it is a viable alternative,” Reeves said.

Confederate symbols have come under increased scrutiny in recent weeks amid protests against racial injustice across the United States, and monuments are being toppled in some states. Mississippi has the only state flag that includes the Confederate battle emblem, a red field topped by a blue X with 13 white stars.

White supremacist Mississippi lawmakers set the flag design in 1894 during the backlash to political power that African Americans gained during Reconstruction. People who voted in a 2001 statewide election chose to keep the flag, but the rebel symbol has remained divisive in a state with a 38% Black population.

Mississippi legislators have the power to change the flag, just as they have changed other state symbols. Several years ago when Reeves was lieutenant governor and was presiding over the state Senate, legislators added “In God We Trust” to the state seal.

Reeves, however, has said repeatedly that if the flag is going to be redesigned, he thinks it should be done in another statewide election. He said Monday on social media that “any attempt to change the current Mississippi flag by a few politicians in the Capitol will be met with much contempt.”

The Legislative Black Caucus said in a statement Monday that legislators should vote to change the flag during the current session, which is set to end in a few days.

“We want one unifying flag that does not incorporate Confederate symbols or connotations," said the caucus chairwoman, Democratic Sen. Angela Turner Ford of West Point. "Our constituents, student athletes and businesses deserve better.”

A white Republican statewide elected official, Insurance Commissioner Mike Chaney, said Monday that the current state flag needs to be “retired and replaced" because it does not achieve “a common brotherhood of our citizens.”

Some people and businesses have been flying a flag designed in 2014 by Jackson artist Laurin Stennis. It has red vertical stripes on either end with a white field in the center topped by a 19 small blue stars encircling a large blue star that represents Mississippi as the 20th state.

Stennis is the granddaughter of the late U.S. Sen. John C. Stennis, who retired in 1989 after being a segregationist for most of his four decades in Washington. While she rejects that part of her grandfather's mindset, some critics have said Mississippi should not adopt a state flag that has commonly been called the “Stennis flag” in recent years.

Laurin Stennis said Sunday on Twitter that she is stepping away from the effort to change the state flag “as I understand the hurt and potential harm my last name can cause." The flag she designed has been rebranded as the ”hospitality flag."

Other people have proposed a variation on the flag Stennis designed, with a circle of blue stars around a magnolia, the state flower.

Reeves is not the first person to use “separate but equal” to describe plans for two state flags. White politicians in the U.S. used the phrase decades ago to try to justify keeping racially segregated schools. The U.S. Supreme Court declared the doctrine unconstitutional for schools in 1954.

All eight of Mississippi's public universities stopped flying the state flag years ago because of the Confederate emblem. Several cities and counties have also removed it. Several business groups have said the state should drop the Confederate image from the banner, including the politically conservative Delta Council, which represents business people and farmers.

Mississippi faces additional pressure because the NCAA on Friday expanded its policy banning states with prominent Confederate symbols from hosting its sponsored events. That happened a day after the Southeastern Conference made a similar declaration aimed at the Mississippi flag.

The current NCAA ban, in place since 2001, applies to what the NCAA calls predetermined sites, such as for men’s basketball tournament games.

Mississippi is the only state currently affected by the policy. The expanded ban is supported by all eight public universities in the state. It means that even when sites of NCAA events are determined by performance, as they are in baseball, women’s basketball and softball, Mississippi schools will not be permitted to host.