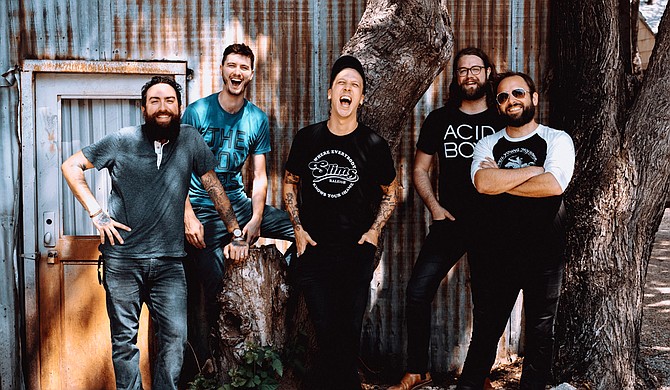 Change has long been the status quo for singer-songwriter BJ Barham of alternative-country act American Aquarium, but rarely has so much happened in such a short span of time.

Since the release of 2016's "Live at Terminal West," the North Carolina native got sober, got married and had a child. On the opposite side of that coin, he also lost American Aquarium's previous lineup, but soon gained a new one in lead guitarist Shane Boeker, bassist Ben Hussey, drummer Joey Bybee and pedal-steel guitarist Adam Kurtz.

That tumultuous time period ultimately inspired American Aquarium's seventh studio album, "Things Change," released June 1 on 3CG Records, and what Barham says is his best and most challenging batch of songs yet. The album reaches into new songwriting territory, but it also seems to have reached new fans, reaching No. 20 on the Billboard Top Country Albums list and No. 7 on the Americana/Folk Albums chart, and pushing the band to No. 5 on the Emerging Artists chart, among other rankings.

The Jackson Free Press recently spoke with Barham over the phone to find out more about the band's latest record ahead of American Aquarium's upcoming stop in Jackson on Tuesday, Sept. 11.

A lot of artists think their newest album is their best, but you've been saying that really frequently about "Things Change." Why do you feel that way?

Yeah, every artist is egotistical and thinks that the newest thing is the best thing they've done and everything that came before that was just the work it took to get to the brilliance of the new record. But for me, you know, this is the first record (where) I got to step out and really write about a lot of things I've never written about before. We took a lot of chances on this record, and a lot of the chances paid off.

When you haven't written about those topics in the past as much, what was the experience like writing about things that your fans don't typically tie to your music?

I never underestimate our fan base. I think a lot of artists do, and that's a detriment to them as artists. I really stand by the fact that your fans are a lot smarter than you think they are, and don't ever say, "I don't think my fans are going to get it," because if they're fans of you, they're going to get it. And I trust that. I trust that my fans have taken this journey with me for the last 12 years.

I don't think this was too much of a surprise for anyone who knows me, who knows me personally. A lot of things changed for me, no pun intended, since our last record. I got married, sober, I had a band quit, I had a band join, we had a presidential election that split our country in half, and I had a daughter.

So anyone who kept up with my personal life was going to realize that, "Oh wow, a lot of tides turned in the last three years for him; I guarantee he's going to write about it," just because that's what I do. My records are kind of these autobiographical snapshots of where I am in life. And so, the true fans, I don't think this record surprised anybody.

When there are so many big changes for you at once—a band quitting, getting married, having a child—how do you keep writing and touring and being consistent?

Well, there's only one thing I've ever been good at, and that's writing songs and traveling around the country playing them for people. Know your strengths, I guess, you know? But my wife fully supports what I do for a living. The hardest part now is the added variable of a child. I want to be home a lot more nowadays.

But with this new record coming up, it was kind of like we knew this was going to be a summer where I had to tour a lot to support this record. But I'm taking a lot of the rest of the year off, just to make sure that I'm balancing that family man with the working man.

Let's talk about the new musicians that you're playing with. Did they play on this album?

Yeah, that was the new band on this record. We've been together for a year—at the end of last August, we got together—so it's a (breath) of fresh air, you know? It's like a shot in the arm for me as an artist to be surrounded by not only just new, talented musicians, but also musicians that bring such an amount of positivity to the table, that want to be here, that are excited to play these songs every night.

I miss the old guys, you know, just as much as anybody does, but I didn't ask them to leave. I didn't fire anybody. They all quit. So for me to sit and wallow in it is not my style, and also me giving up on playing music just because certain people don't want to play music with me is definitely not in my DNA.

When it came time to rebuild, that was the only choice for me, was to surround myself with positivity, surround myself with musicians that wanted to be here, and to learn from the mistakes that I've made, the interpersonal relationship mistakes I made in previous iterations of the band, and try not to make those mistakes again.

That's really what this was about. The last band, sadly, I made a lot of missteps over an eight-year career with them. But at the end of the day, none of those guys were original members. I've had almost 36 members since 2006. Change happens for me. The lineup is sometimes tumultuous. But I'm a grown enough man where I can admit that most of those relationships were my fault, and there were missteps by me, and I'm learning how to deal with that.

I'm learning how to be a better bandleader, a better person, and hopefully, I don't make the same mistakes with this band. Hopefully, I continue a run of positivity well into my career.

What would you say you've learned about being a friend and being a bandleader, balancing those two sides on the road?

You know, obviously, there's got to be a guy in charge, but it's all about not always rubbing your authority in people's faces. It's about being a friend first and a boss second. It's about not making it feel like work because, when you make it feel like work, nobody wants to hang out with the boss, and it's one of those things about making sure everyone knows they have a job to do, but also making sure that everyone knows their job isn't being held above their head.

We have fun out here. We're very, very fortunate that our job is traveling around the country entertaining people for a living, and doing something we love for a living to entertain people for a living. It's never losing sight of that, never losing sight of just how fortunate we are. There are millions of bands that start in their parents' garages and never make it to the point we are now, so just considering ourselves lucky and being grateful we're at this point is the biggest thing.

On that topic, there's also a balance between wanting to entertain people and having something that you want to say with your music. How do you balance that while you write songs?

You can't write for anyone else. You've got to write for yourself. I've always stood by that. I write songs for me. It's extremely cathartic for me to get some of these feelings out. So when I sit down to write a song, first and foremost, I write a song that I want to hear. I write a song that I would listen to. But I try to be raw enough and honest enough because if you put those raw, honest human emotions in there, it's going to relate to people.

No matter how individual your raw emotion feels, there are thousands of people who have had that same exact emotion, and they haven't been able to capture it in words. If you can capture that emotion in simple, raw, honest words, it's going to relate to people. When I sit down, I try to write something that hits me, because if it hits me, then nine times out of 10, it's going to hit someone else.

Man, if I had an answer to that, I'd just write our greatest-hits record and retire. [Laughs] It's still a learning process. It's still a curve. I've gotten a lot better—like, if you look back at my first record from 2006, I obviously have gotten better. I make a lot better production choices, I make a lot better writing choices, song structure choices, etcetera. I think every record is just part of your curve as an artist, and I don't think that curve will truly be able to be judged until I'm 60, you know?

I think "Things Change" is the first record where I really got the conciseness down. I really got where you can listen to that record and hear an overall theme. It's congruent. And that's the biggest thing is trying to make a record instead of just a bunch of singles.

You mentioned writing some political songs for this record, which is something not everyone can do or do well. How did you go about that, trying not to be preachy but saying what you want about where we are as a country?

Well, it's exactly what you said and as simple as how you said it: tell people how I feel but don't be judgmental about it, which is a lot harder to do these days than it is to say it. All I wanted to do with this record was start a discussion. I didn't want to have an argument. And there's a big difference between (those) because, when you have a discussion with someone, respect is involved. If you respect the other person's opinion, you can have a discussion, but if you don't respect someone, you're going to have an argument.

The biggest thing when I was sitting down, anytime I touched on the politics in this record, I wanted to make sure that I was not only saying how I really felt and letting everyone know without a doubt where I stood on things, but I also didn't want to step on anyone's toes. I didn't want to piss anybody off because that's the last thing you should do if you want someone to listen to what you have to say, is immediately offend them.

If people listen to that and they find a record about hope, hard work and perseverance, I don't know anything more American than that. That is the American ethos for me, thematically, in a record. They're hearing what they want to hear if all they're hearing is the politics of it.