The Heart in Hilarity 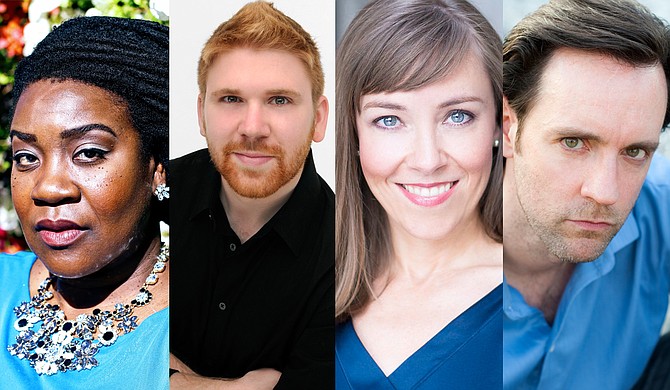 The members of the Mississippi Opera are clearly fans of W.S. Gilbert and Arthur Sullivan, and as the legendary duo's music has been performed across the globe for more than a century, they should be in good company.

Over the past few years, the Mississippi Opera has featured several of the theatrical team's well-known works, including "The Mikado" in 2016 and "The Pirates of Penzance" in 2017. Now, "The Hilarious World of Gilbert & Sullivan," the latest installment of the "Cabaret at Duling Hall" series, will revisit some of the music from those productions, along with iconic operettas such as "H.M.S. Pinafore," "The Gondoliers," "The Yeomen of the Guard" and "Patience."

To bring the music to life, the Mississippi Opera turned to Paul Houghtaling, a bass-baritone vocalist, director, professor and president of the National Opera Association. He has become well acquainted with the work of Gilbert and Sullivan over his 30-year career and says the "hilarious" aspect of the show's title is only one side of what audiences will find in the musical selections.

"I love the repertoire," he says. "I think it's rich and fun and lighthearted yet sophisticated. People think it's all just silly and goofy—it's not. It's great stuff. And we're doing selections from many of the hit shows and some slightly lesser-known works, as well, but it's all great music, and it'll be great fun."

Mississippi Opera Artistic Director Jay Dean first approached Houghtaling, who has performed in a handful of shows for the Jackson-based music organization, about directing a Gilbert and Sullivan opera, but time and budgetary constraints made it difficult. Then, they had the idea of making it a revue-style show, opening the door to a variety of music from the Victorian-era opera collaborators.

For the "Cabaret at Duling Hall" show, Houghtaling decided to reach out to his colleagues at the University of Alabama, where he is the associate professor of voice and director of opera theatre.

Houghtaling may be serving as both performer and director, but don't expect him to cast himself as the gallant lead for any piece.

"I'm the comic baritone, the patter baritone. I don't sing any of the good-looking, heroic stuff because I'm 5'8" and have made a living being a goofball," he says with a laugh.

While the Mississippi Opera's "Hilarious World of Gilbert & Sullivan" will be a fun and, at times, funny viewing experience, he says that audience members can also anticipate a wit, beauty and heart behind every song.

"Not every piece of music we're doing is meant for jokes, is meant to go right to the funny bone," he says. "So much of it just goes right to the heart or to the intellect or makes you think about love, about relationships, about missed opportunities to find the right person in your life. ... While it always makes you smile, Gilbert and Sullivan also can make you think and just sit back and enjoy a beautiful melody."