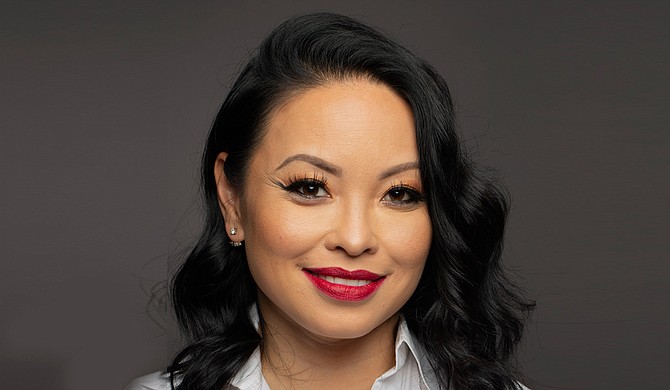 Cindy Wilson never planned on being an author, but she had always planned on telling her story. A Jackson couple adopted her as a baby from her birthplace of Seoul, South Korea, in 1975, and she grew up in Mississippi as the child of an African American family.

While she is sure that other people have grown up in similar family situations, Wilson, who now lives in Atlanta, says that she has yet to meet anyone else with the same story. Throughout her life, friends and colleagues would tell her that she should write a book or share her experiences in some fashion. She says it was thinking about the world her young niece, Alexandria, will live in that inspired her to finally take the next step.

"It's always been in the back of my mind," Wilson says. "But just seeing things the way they are now, with everything being so divisive when it comes to politics and race and culture and identity, I just felt like now was the right time. And so I started writing the book last year, which was very (much the) intent with what I was writing and ensuring it made an impact based on what was going now, the climate we live in in today's world."

On Aug. 8, Wilson released her memoir, "Too Much Soul: The Journey of an Asian Southern Belle" (Too Much Soul LLC, 2018, $19.99), which sheds light not only on her youth in Jackson and her personal life, but also on her current search for a way to connect with her multifaceted cultural heritage.

Rather than steering away from that conflict, Wilson decided to include quotes from black and Asian friends, revealing some earnest and frank discussions of topics such as racism, assimilation and privilege. In particular, Wilson says she sought out the perspective of her Asian friends who were raised in that culture and are more connected to their heritage.

"We would have these discussions about people's perception of me as an Asian woman and my experiences, which are going to a little different from theirs," she says. "So there were some commonalities, but then there were some things they pointed out as far as being a 'model minority' and being associated with some positive stereotypes, which is true, and I just never looked at it that way.

"Growing up and being Asian, not that many people in Jackson were Asian, and I just looked at it like being different was not a good thing because I always got picked on for looking different. My experience was a little different from theirs in that (way), but then, they would bring up certain things about just the culture and the heritage of it, and I could definitely see how it would be true, based on their experiences, their perspective and just stepping outside of myself to see their viewpoint."

In the months since writing "Too Much Soul," Wilson says that she has started exploring that aspect of herself. She recently visited Seoul, staying for about eight days in the city and learning more about her birthplace.

Wilson says that she did not necessarily feel a belonging in South Korea, especially given her outgoing nature, which many Korean natives that she interacted did not share. However, the trip did deepen her desire to learn more about this part of herself.

While her family, her racial identity and her sense of self may not be the same as many of her readers, Wilson says many people have told her that they connected with "Too Much Soul" simply as a story about being different. She also hopes that her memoir will help readers begin to reconcile the biases and prejudices they experience, as well as their feelings toward those around them.

"I really hope that it helps to open minds to not only take a look at the actions of other people but also the actions and the way that you think toward other individuals and what role you play in it," she says. "At the end of the day, even though I talk about culture, race, identity and a lot of different things in the book, the overall theme is humanity and being able to meet people where they are.

"... Sometimes, people are where they are because of their life experiences, but (it's about) not shaming them or making them feel bad for thinking the way they think, but really trying to understand and then also, in a sense, educating them and letting them know how their thoughts and actions hurt you or can hurt other people."

Cindy Wilson signs copies of "Too Much Soul: The Journey of an Asian Southern Belle" at Churchill Smoke Shoppe (1198 Lakeland Drive) on Oct. 6 from 3-7 p.m., and the Jackson State University bookstore (1400 J.R. Lynch St.) on Oct. 8 from 10 a.m. to 3 p.m. For more information, visit toomuchsoul.com.