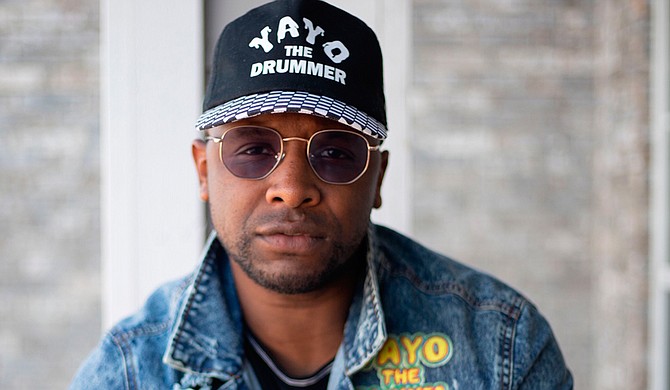 Jackson-native percussionist Matthew Mayberry has made a career as a percussionist for hip-hop artists such as Lil Wayne and is currently working on a solo release titled “The Rhythm Wars Project.” Photo courtesy Shots on Taylor

Spotlights burst and reveal the stage setup for platinum-selling rapper Lil Wayne, his name superimposed against a black background, reaching at least 25 feet over the screaming audience.

As the DJ begins spinning the track, though, the first thing fans may notice is not which song is playing but the energy of a new element: hip-hop percussionist Matthew Mayberry, better known as Yayo the Drummer.

The Jackson-native musician has been performing with Lil Wayne for about two years, but he says that he has worked to promote live instrumentation in hip-hop shows for a long time.

Mayberry says: "I think—not throwing shade or being negative or anything—but to me, one of the most boring shows for me growing up was to see an artist with a DJ and that be it, when they're not one of those artists that dances or moves, or they're just not one of those entertainers."

While he likes the image of an artist and a DJ together onstage, he says there is nothing quite like bringing an audience face to face with the instruments, which livens not only the fans but the artist.

Mayberry did not immediately make the jump to hip-hop, though. He grew up playing piano for his church before picking up the drums and other instruments, and then, he began playing a variety of musical styles while attending Tuskegee University.

Lil Wayne's former manager, Cortez Bryant, a longtime friend of Mayberry and a fellow Callaway High School graduate, brought the drummer and the popular hip-hop artist together in 2014 after Mayberry pitched the idea to him.

"From the first show where we tried it where it was drums, a DJ and him—his manager at the time, Cortez, took my idea and wanted to run with it—when Wayne was introduced to it, he kept turning around in the middle of the show like, 'Man, what is he doing back there?' ... He (told) Cortez after the fact, 'That drummer I've got back there, he's like a one-man band. He sounds like 50 people.'"

Since then, "One-Man Band" has become part of Mayberry's branding as Yayo the Drummer, appearing on much of his merchandise, and Lil Wayne has continued using the name to introduce him during performances. He recently shared the stage with Lil Wayne on the Nov. 10 episode of NBC sketch-comedy show "Saturday Night Live," performing the songs "Uproar" and "Can't Be Broken" with guest vocalist Halsey.

Over the past few years, Mayberry's heightened profile has opened the door for him to play with other artists, as well, including Drake, Mannie Fresh and Preme, when not on tour with Lil Wayne. He is also currently in the process of making a solo mixtape titled "The Rhythm Wars Project," which is scheduled for release in spring 2019.

"Instead of it being more 808 (drum machine) and pad based, I'm going to add the live drums to the tracks that I make, but the reason it's called 'Rhythm War Project' is that it's going to sound like a war between instruments—not (out of control) but to the point where it sonically makes sense, and it's something you've never heard before."

After two years of nearly full-time touring as a hip-hop drummer, Mayberry says that he still is blown away every time he steps onstage. It is a blessing, he says, but not one that comes without work. He is constantly developing his style while working to make sure he balances his playing with the vibe of the artists and DJs he is performing with.

"It's not one of those things where, 'Oh, this happened, and that led to this,'" he says. "God just opened up doors and was placing people in my path to help me with it, but I was preparing it all along. When preparation meets opportunity, it equals success every time."