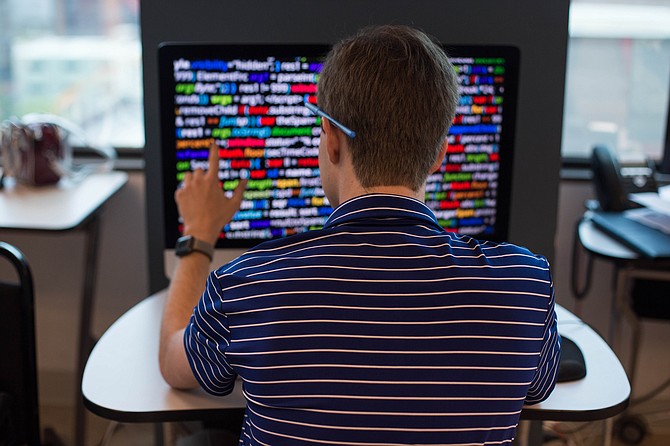 Funding for the Mayor’s Youth Initiative Summer Youth Employment Program is coming from unspent Department of Public Works salaries. And it has caused not a small amount of tension in city hall. Photo by Imani Khayyam.

JACKSON — Tensions ran high at the third Jackson City Council meeting in a week during discussions about funding for the Mayor's Youth Initiative Summer Youth Employment Program that is supposed to train young people age 16 to 24 to code and develop apps.

The City's last-hour request of funding for the program, though, became another example of the mayoral administration's tendency to wait until the last minute to request actions and funding from the branch of government tasked with clearing expenditures.

Mayor Chokwe A. Lumumba's program started June 25, three weeks later than originally scheduled. Announced on May 22, the mayor said funding would come from extra money in the city's budget.

But, they were unable to find extra money in the Human and Cultural Services budget as planned, Chief of Staff Safiya Omari told the JFP on June 21.

"We thought we were going to be able to find the money by doing some revisions within Human and Cultural Services budget," Omari said. "So that it wouldn't have had to come before council. But when we couldn't find the funds there."

Less than a week before the delayed start date, the mayor's office requested $124,000 to fund the program at a June 20 meeting. Councilmember Ashby Foote questioned why the request for funding came up for the first time during an emergency meeting held to find money to fix collapsed sewer pipes.

The council did not vote on the funding at that meeting. Instead, it picked it up again at the June 21 meeting. This time, the mayor's office requested $74,924—which the council granted. "It changed because we wanted to not go into fund balance any more than we have to," Omari told the JFP.

The initiative employs 80 people, 16 to 24 years old, to work 20 hours a week at minimum wage, which is $7.25 an hour, for six weeks. Apple gave the City the  coding curriculum for free, the City said at a press conference.

Funding for the youth employment program comes from unspent salaries in the Department of Public Works instead of the unrestricted fund balance, also known as the rainy-day fund, Omari said.

Tempers flared between Ward 4 Councilman De'Keither Stamps and Omari during the meeting when he questioned her about details.

"There is an ongoing program within the city to fund summer youth. Youth employment was not budgeted, but the staff members for that were funded," Omari said. "What this is requesting is a budget revision so we can fund hiring the students. The administration has the authority to fund programs that it wants to run within the confines of what approval comes from council."

"I'm not trying to have an argumentative tone, Dr. Omari," Stamps said.

"I think so," Omari responded.

Foote was the only one to vote against funding the program. Councilmen Kenneth Stokes, Ward 1; Stamps; Charles Tillman, Ward 5; and Aaron Banks, Ward 6, voted for the funding. Melvin Priester Jr. of Ward 2, and Virgi Lindsay, Ward 7, were not present.

'I Think It's Only Fair'

The mayor said at the June 20 meeting, the city could face legal action for not funding what they promised.

The $15,000 for the festival is in addition to $75,000 coming from Visit Jackson—which is funded by a 1 percent tax on restaurant and hotel sales.

The Farish festival wanted the $15,000 because the money from Visit Jackson requires an enhanced festival, including a larger stage and gospel concert. Without the city's money, the enhancement is not possible, Constituent Services Manager Keyshia Sanders said.

The council tried to fund the Farish festival at the May 22 meeting, but it didn't use the correct procedures and disbursement was not possible. The June 21 meeting rectified the mistake.

Before then-Director of Department of Finance and Administration Charles Hatcher left his position, he warned against frivolous spending of the fund balance, as it could make it harder to avoid raising taxes or to respond to an emergency.

"When you look at how much we're going to need to spend, and how much (we're) going to make in the next six years, that fund balance is going to evaporate in the next three years," Hatcher said in a previous interview. "[W]e need a strategy for building it up. It undermines that effort when we pick away at it

See jfp.ms/city for daily reporting on the City of Jackson and the mayor's office.