A Story of Healing and Hip-hop 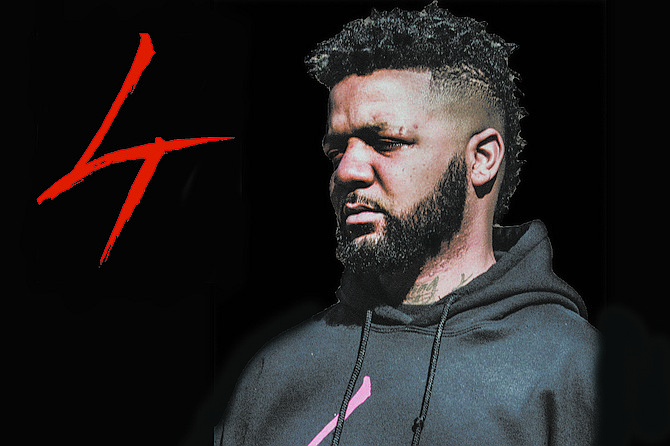 That was rapper D'Andre Jones' first thought after doctors diagnosed him with a rare muscle disease called idiopathic inflammatory myopathy about five years ago. They warned him that, eventually, complete paralysis and respiratory failure would be in his future. On the opposite side, Jones says he was grateful to finally know what it was.

"For a year, they couldn't tell me anything," he says. "By the time I found out what I had, I was 123 pounds. I had lost like 60 pounds of body mass, and I couldn't stand up on my own or any of that stuff. I went all this time not knowing anything, and my body went through all these changes, so I guess that I was happy. But at the same time, when you hear you're going to die, that's not the best news."

By that time, Jones says he had already put a hold on his career as Jackson hip-hop artist 808 tha BASS, as the disease got progressively more difficult to work around. It became more risky to try to go out and record or perform, he says. He would fall more easily, and when he did fall, he couldn't pick himself up.

"I really stopped going out," he says. "I stayed in the house all the time. That's all I did. After I got diagnosed and got on treatments, probably about a year later, the people around me that knew me and knew what I had been through but also knew I did the music, they actually pushed me to (record). I was like, 'I can't even stand up,' and they said, 'Well, pull a chair in there.'"

His music has always centered on his own life rather than bragging about things that he doesn't have, he says, so naturally, he began to write about the real-life hardships that he has faced through his disease, as well as the lessons that he has learned.

That music became the crux of his one-man show as 808 tha BASS, "My Story." Jones will perform the show, in which he tells his story through a blend of music, dialogue, interviews and other visuals, for the fifth time on Saturday, Feb. 3, at Russell C. Davis Planetarium.

While he didn't set out to be a voice for others in similar situations, he says that many people have reached out to tell him how much the music has meant to them.

"The whole reason I even started talking about my disease was because I was self-conscious and embarrassed about what I was dealing with," Jones says. "I felt like if I put it out there in front of everybody, then what can you say to hurt me? It just so happened that other people were inspired and felt like they could talk to me."

Something as vulnerable as "My Story" is a little out of the normal realm of hip-hop, and Jones says he still gets nervous about that, no matter how much work he puts into the show.

"But once I get on that stage, give me about a minute and a half, and it all starts rolling out," he says. "Even when I get to the vulnerable moments, I let them out because that's what's made people gravitate toward it. If I took that away, I guess people wouldn't vibe with me as much. So I give them the truth."

808 tha BASS performs "My Story" at 8 p.m., Saturday, Feb. 3, at Russell C. Davis Planetarium (201 E. Pascagoula St.). The lobby party begins at 6:30 p.m., and will feature music from Nina Linn and Maurice Gibson, as well as makeup art from Christine Cody. General admission is $15, and VIP admission is $25 at eventbrite.com.