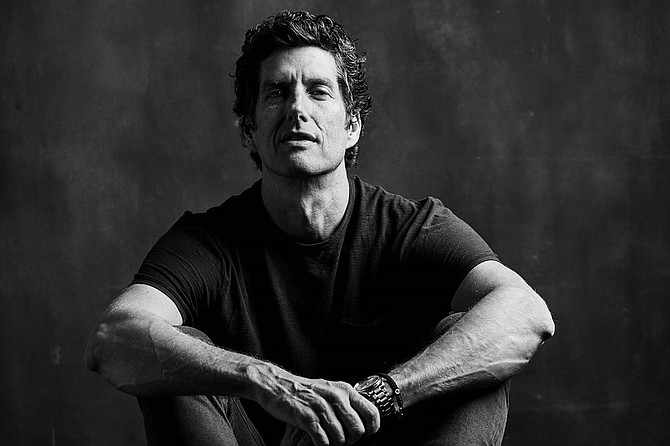 Better Than Ezra fans will hear plenty of hit songs when the band's frontman, Kevin Griffin, performs solo on Jan. 19 in Jackson. However, not all of those familiar tunes come courtesy of the New Orleans, La., alternative-rock act.

Griffin has had a string of successful songs through Better Than Ezra since forming the group in Baton Rouge, La., in 1988, including "Good," "King of New Orleans," "In the Blood" and "Desperately Wanting." What some listeners may not know is that he has also co-written hits for well-known artists such as Sugarland, James Blunt, Howie Day and Daniel Powter.

The Jackson Free Press recently spoke with Griffin over the phone about his latest tour and what goes on behind the scenes in songwriting.

With Better Than Ezra still touring, what inspired you to also get on the road doing solo shows?

I guess maybe two years (ago)—Ezra's still touring a lot, and we do our summer tours—I wanted a forum where I could not only do Ezra songs, but I could also play the songs I get to write with other artists in just a less formal setting. There were suddenly a lot of rooms around the country, like City Winery in Chicago, ... that were embracing that kind of (show). You know, they're about 350- to 500-seat rooms, and I thought, "Wow, that sounds really cool."

I started off just playing acoustic, and I kind of wanted to challenge myself to get back to doing that, maybe the purity of that. I like talking (to audiences) a lot and maybe taking left turns, so that's really just a creative outlet.

What can people expect to hear that they wouldn't hear at a BTE show?

Well, they hear songs that (are) hits I've had with other artists, from Howie Day songs or Taylor Swift or James Blunt, and just different artists like that—my versions of these songs. Usually, if it's a female artist, it's an octave lower. [Laughs] And (there are) just covers. I like doing things that wouldn't be expected.

When I do these shows, they're still very, I guess, up-tempo. I love artists like Ray LaMontagne and Damien Rice, but I'm not that guy. When I do these shows, I have an amazing percussionist with me, so it's a very upbeat, fun show. I may do a left turn into a Justin Timberlake song out of a Better Than Ezra song or a solo song I'm working on. So there are lot of stories, anecdotes, covers, songs I've written for other people, and you know, hopefully the songs we know and love by Better Than Ezra.

What kind of response do you usually get when playing a song that some fans don't know you wrote or co-wrote?

I love that because, let's say a song like "Collide," which is still getting tons of radio play, I'll tell the story about writing it, I'll play it, and then after the show, invariably, someone will come up to me and go, "Man, I love that cover you did of Howie Day." They still won't realize I wrote it, and that's really funny.

But it's cool to see, for the most part, the awareness or realization that, "Oh wow, you wrote this? Let me hear how you interpret it." I love seeing that look on people's faces. Then, you know, there are always songs that maybe I—"give" is a strong word—but have another artist do, and they're mostly co-writes, rather than myself or Better Than Ezra. So you always have (the question), "If 'Collide' had been a Better Than Ezra song, would it have taken Better Than Ezra's career to a whole other level?"

So when I get to do these songs solo, I get to have that satisfaction of playing it live and hearing people sing along. ... So it's a two-way street: People enjoy hearing the hits that they didn't know I'm a part of, and I get to kind of have that vicarious thrill you get when you play a song people know.

How do you approach songwriting differently working with another artist compared to writing for Better Than Ezra or yourself?

What I'll do is I'll have a write with an artist, like I have some songs on the new Phillip Phillips record, and I won't finish the song. I'll say, "OK, this is a cool chorus idea and sounds like something I can hear Phillip singing," so I'll just get the chorus together. That's usually enough to see if the artist likes it. With Better Than Ezra, I'll have the whole song done, and then the band will arrange it with me. We'll figure out dynamics. With a co-write, there's no point in me finishing the whole song, because if they don't like the chorus, they'll say, "What else do you have?"

And also, you want to give the artist something to work on and (work) off of. That's when the song really becomes great. When it's good, the artist is a good writer, and they're engaged and come up with some great verse, or they make the chorus even better. You just come up with what you think is the hook, play it for them, and they go, "Oh, I dig that, but let's change this chord here." So it's kind of more a piecemeal thing when you're working with other artists.

When you do have an idea that you think is perfect for an artist, what do you do when they don't respond well to it?

You know what? You just move on. It's so often, and that's just kind of the thing with songwriting. I never get bummed out about it anymore because, as a writer, you tend to think everything you do is great. "Oh, this is a great chorus." Then, you realize, "Well, sometimes, that's not the case." Some songs you write, people dig, and other songs, for whatever reason, people aren't feeling.

Then, there are those writers who everything they write (is a hit), whether it's Paul McCartney or f*cking Pharrell (Williams) or whoever is great. But most of us, we hit some out of the park, and others are just foul balls.

So when I sing a song idea, you quickly move on because the worst thing you can do is keep trying to make them feel it. Either they feel it, or they don't. ... Part of the craft of songwriting is remembering your ideas. So then, I'll work with another artist, and I've had songs that have been turned down that I've then played for other artists, and they love (the ideas). They ended up recording them. You keep the songs that you say, "I know this is f*cking good." You know those songs, and it's with a heavy heart that you finally will let one go when you're like, "Man, I've played this for three people. I'm on a train built for one."

What can fans be looking forward to from you after this tour?

Better Than Ezra is doing a nationwide summer tour. Us and Barenaked Ladies will be playing. We're not playing Jackson, but we'll be playing Greek Theatre, Red Rocks and all these great amphitheaters, so check that out. That would be a fun trip this summer to take. I'll have a solo record coming out in the fall, and I'll be playing a few new solo songs at the show at Hal & Mal's.

Then, I've also started (Pilgrimage Music Festival), and we'll have our fourth year this September 22 and 23, a Saturday and Sunday. Last year, our headliners were Justin Timberlake, Eddie Vedder, Ryan Adams, The Avett Brothers and many others. ... It's become one of the hottest festivals in the country in four short years. I'll be playing it solo—Ezra usually does it—but it's the third week of September in Franklin, Tennessee, and it's brilliant.