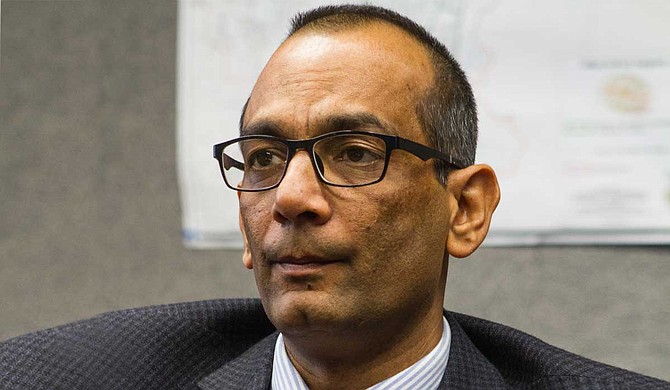 The City’s Director of Planning and Development Mukesh Kumar developed a new team to help entrepreneurs to get their start in Jackson. Photo by Stephen Wilson.

JACKSON — On Fridays an assortment of City workers situate themselves in a small conference room with a large wooden table and several cushy wheeled office chairs on the second floor of the Warren Hood building downtown across from City Hall. They corral an assortment of chairs from the planning department as the room fills for "the best meeting of the week." It's early, and everyone has a full day of other work ahead, but still a jovial spirit fills the air.

Mary Manogin, who works in the City's Office of Housing and Community Development, best demonstrated it when she shied away from greeting Vic Sexton, who handles minority business enterprise certifications.

"Uh, uh," Manogin began as she slid away from Sexton. "Are you still sick?" Everyone laughed.

They are the "B.E.A.T." team, a digestible acronym for the Business Entrepreneurship Assistance Team comprised of volunteers to smooth the process of starting a business in Jackson.

In Director of Planning and Development Mukesh Kumar's opinion, the group does not have a leader because he feels anybody ought to be able to help.

"You don't break silos by getting all of the top-level people and say 'you all are going to talk to each other,'" Kumar said in an interview. "Because then you have a hierarchy of horizontally shared structures—that's all you end up with."

Still, Kumar sits at the head of the table and asks questions to shape discussion, as others chime in with opinions. Since he is literally the boss for most people sitting in that room, it may take more meetings to shake that deference off—B.E.A.T. has only been meeting formally since November 2017.

Getting a business off the ground is tedious and complicated—from zoning permits to obtaining fire-marshal approvals. Members of minority communities are slightly more likely than other groups to become entrepreneurs, Kumar said. When you hold income, education, networks, and environment constant, an African American 20-year-old is more likely to start a business than anybody else, he added.

"The City of Jackson is going to go where the businesses are going to go—it's really that simple," Kumar said the an interview.

While the outset is simple, they face the challenge of breaking down complicated and institutional "silos," as Kumar calls them, that make it harder for people of minority communities like Jackson to start businesses of their own.

"We have a huge untapped potential," Kumar said. "(R)educing those barriers as much as we can from the City's point of view, we think that we can tap into that entrepreneurial propensity so that we can have more entrepreneurship formation happening here in the City of Jackson."

"That was one of the first things we realized," Kumar said. "The businesses were getting frustrated when they called the main switchboard—the person might not know what the situation is so they might not be able to direct you to the appropriate location or office."

Kumar said often by the time new business owners contact the City about getting permits to open and get inspected, they've already invested money, sometimes substantially, instead of checking with the City first. If there's an issue with the space, they're often already deeply invested and might be stuck with it."

The team discussed this at their last meeting, even laughing at shared experiences of people failing to understand that zoning is one of the first major steps to getting a business off the ground. They turned their banter into an action item.

"It's almost like we need to have these workshops inviting folks in so that we can educate them," said Michael Davis, business development manager in the City's planning department. "Because for the most part, they're already knee-deep in."

Manogin left the meeting with the task to find potential dates and locations for open-house workshops throughout the City to inform citizens about the technical process of starting a business in Jackson before they began the legwork.

The B.E.A.T. team also aims to help sole-proprietor businesses create more jobs beyond that of the business owner. By model, sole-proprietor businesses present the lowest barrier to entry into the market because an individual can just create a job for him/herself by going through the zoning and coding process with the City. That accessibility creates a lot of competition, particularly in the service-sector, Kumar said, and he hopes for his office to become a resource to shift the paradigm.

"We want people to start thinking about 'what can you produce?'" Kumar said. "Which is different from what the market already has."

Shifting from 13 years as a professor at Jackson State University into real-life application of his studies, Kumar now works to implement livable ideas. He likes to think he is making a difference, but quickly clarifies that what he does is not more important than what others do.

Kumar sees research as a sole enterprise, and working for the City has many more threads, and he has larger questions to answer—it's a full-fledged enterprise to complete his metaphor for him.

When the JFP photographer came into the interview, Kumar lost his train of thought. He seemingly does not like to be at the forefront, and even said later that the B.E.A.T. team should be the photographer's focus because they're the important factor.

Soon after the photos began, he got to a part in the conversation where he spoke about mirroring Mayor Chokwe Antar Lumumba's people-first approach in his role.

"I would like to think that's why the mayor asked me to do this...," Kumar said. "A lot of things the mayor talks about (such as) the collective genius that is among us and that we need to tap into it, they're not just ideas—they're ideas that you can live."