Henrietta Leavitt: Under a 'Silent Sky' 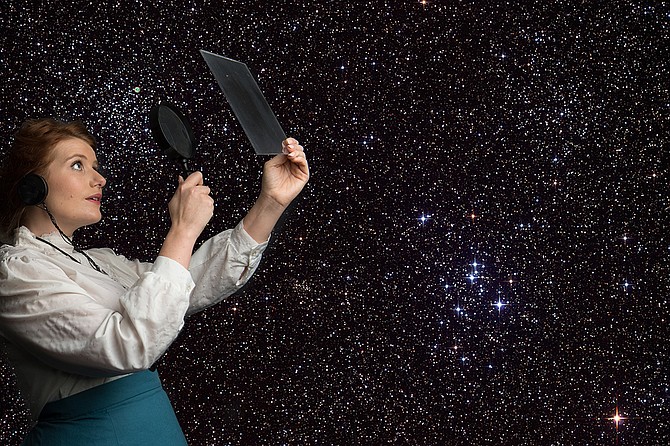 In the opening scene of "Silent Sky," two sisters, Henrietta and Margaret Leavitt, gaze at the wonder of the night sky and playfully banter about their two divergent passions. For one, it's a career in astronomy. For the younger, it's marriage. The idea that one could have both—a career and a family—is inconceivable at the time.

Set in the early 1900s, the play, which Lauren Gunderson wrote, depicts the story of astronomers Henrietta Leavitt, Annie Cannon and Williamina Fleming, who pioneered the science of classifying and categorizing stars at the Harvard Observatory during an era when women received little credit for their work and earned half the pay.

New Stage Artistic Director Francine Thomas Reynolds, who is directing the production at New Stage Theatre, was looking for a story about women when she came across the script.

The play has a sense of wonder, she says. "It's lovely and timely—the intersection between women in the workplace and at home," she says. "It's heartbreaking in that the great work that Henrietta was doing, she was told (by men) in the play, 'Alright, we'll take it from here. Good work.' And had she lived, she might have won the Nobel Prize."

Unlike most real characters, little was known about the nearly deaf Henrietta, Cleveland says.

"I think the only personal thing we know about her was written in her obituary, which is that she imbued everyone around her with sunshine," she says.

"When I first heard about the script, I was like, 'Oh, it's a play about science.' I didn't think I was going to like it very much. But it's really surprising and fun."

Making sense of the science of astronomy was the biggest challenge, cast members say. Reynolds says that if the actors do not understand what they're talking about in those scenes, neither will the audience.

"I need somebody else to explain (astronomy) to me like I'm a 2-year-old," Miklovic jokes during a rehearsal.

Her character, who serves as Henrietta's mentor, teaches her how to designate stars and measure their brightness.

Robinson describes Williamina, a more seasoned mentor, as a maverick who curses and likes going to Harvard football games.

"When you get to play real people and learn about things that you didn't have a lot of knowledge about before, that's just one of the coolest things about being an actor," she says.

The lone male in the cast, McCarley, portrays Shaw, the only fictional character. Henrietta and Peter add a romance to the play that feels contemporary. However, when Peter asks her to accompany him to Europe, she expresses an unwillingness to compromise her career. The magnitude of that sacrifice was not lost on McCarley.

"The main takeaway for me is it's an opportunity to immerse myself in the emotional aspect of what it was like for a woman to live in those times," he says, "the emotional turmoil of knowing that no matter what you did, you would never get beyond a certain point, and doing it anyway, though, persevering and knowing that even if you couldn't achieve something for yourself, maybe you could do something that would benefit others."

Hence, the other theme of the play: standing on the shoulders of giants, which is a common line in the play.