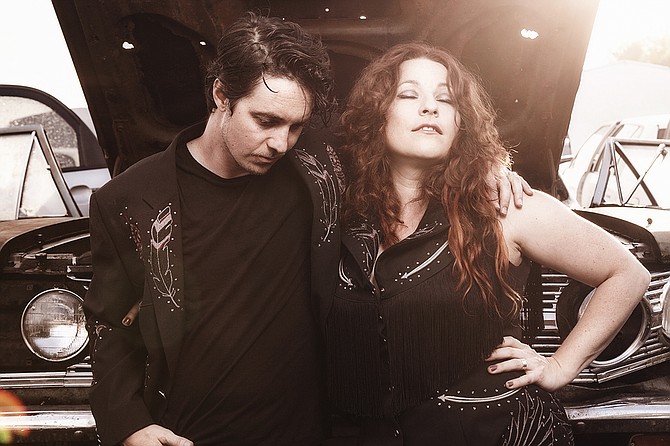 The timeline, not the record itself, was the surprising point, of course. The musicians marked their first collection of covers as "Vol. 1" back in 2015, assuring future installments for fans and for themselves.

"Once we put that on the cover, we knew we basically had to make Volume 2," Hearst says. "We knew that these records would give us the opportunity to experiment in a recording studio and experiment with friends and people we admire, in kind of like a musical companionship situation outside of the Shovels & Rope restrictions."

On "Vol. 2," listeners will hear Shovels & Rope take on songs from acts such as Sigur Ros, Concrete Blonde, The Clash and The Hollies, while also collaborating with artists such as Brandi Carlile, Hayes Carll, Rhett Miller and John Fullbright. Rather than performing modern hits or well-worn classics, Hearst says that she and Trent focused on recording songs that hold special meaning to them.

They set out to bring all the songs to life in new and interesting ways, so it won't matter if listeners already know the originals, she says. In the case of the opening track, "Cleanup Hitter," many people likely won't be familiar with the song, as it was a co-write between Trent and Bill Carson, a friend and fellow South Carolina singer-songwriter.

"He's a teacher in Charleston, he's one of our favorite musicians, he's an arranger, he organizes some of the coolest musical events that have ever happened in Charleston, but he's not a famous songwriter," Hearst says. "He's not a rock star, has no interest in that, but to get (Brandi Carlile)'s voice sharing his song—it's such a cool thing to be able to do that."

The cover series serves as both a way to keep putting out material between Shovels & Rope records and as a boundary-pushing creative exercise, Trent says. He and Hearst released their fourth studio album, "Little Seeds," in October 2016, applying some of the recording techniques from "Broken Jukebox, Vol. 1," but more importantly, its experimental attitude.

"I feel like on 'Little Seeds,' we just learned how to take some risks," he says. "We might have offended a cowboy by having too much feedback and fuzz guitar, and we may have a offended a rock-and-roller by having too much mandolin. You can't win them all, but we're doing the best we can, and we're making stuff the way that we want to make it."

Making music however they want to has always been part of the band's makeup. As Trent, Hearst and now their young daughter, Louisiana Jean, are on the road for most of the year, Shovels & Rope has always recorded in a home studio or in various locations while on tour, from hotel rooms to university basements.

"It's funny now: We're settled," Hearst says. "We're actually going to be (making) a record in our new, outside-of-our-home recording studio. All the microphones are going to probably, like, stay where they are for the whole time we're recording, and we're going to be able to make it at our leisure because nobody's got a clock where they're counting."

"But we won't ever be here so we'll probably end up recording on the road, anyway," Trent says with a laugh.