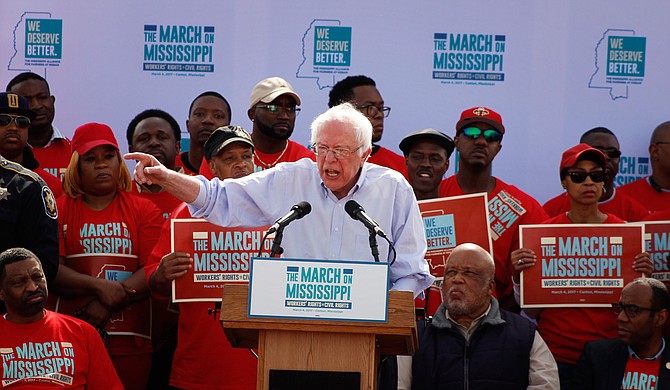 U.S. Sen. Bernie Sanders, an independent politician from Vermont, came to Canton in March to support some Nissan workers' effort to unionize, which failed. He routinely emphasizes economic "class" issues over racism, which turns off many black voters. Photo by Arielle Dreher.

When the run-up to the 2016 primary season started, I was so ready to feel the Bern, y'all. I wasn't a Hillary stan even though I loved her in the '90s as a young woman. What I didn't like as a feminist was being told to support her due to our shared gender without knowing her specific platforms. I was feeling Bernie.

Yet some people can't be invited to the cookout. They just can't. They might sound like they are kinda down but then they open their mouth a few too many times, and there it is—nonsense just flows freely from their lips like water over Niagara falls. Bernie cannot come to the cookout. Sorry, not sorry.

It is also why Bernie Sanders shouldn't come to any Martin Luther King Jr. memorial events in Jackson, such as tonight's town hall with Mayor Chokwe A. Lumumba. Sanders has no place here, certainly not as a featured speaker. Before someone thinks I'm saying this simply because he's white, that's not why. But it does inform how I came to this conclusion because his privilege as a white man (yes, I know he's Jewish) informs how he moves in the world.

Shortly before his death, MLK launched the Poor People's Campaign, envisioning it as a multiracial coalition to combat poverty. He understood that poverty, while impacting racial groups, differently cuts across all societal groups. What MLK never did that Bernie Sanders has repeatedly done is say that class concerns override racial issues. That isn't true. The Poor People's Campaign recognized that simply in the way it was designed to work—as a coalition of voices with shared goals.

A coalition means I can come to the table and be fully present as a black woman with needs and concerns for my community. So, too, can every other community, and we all move forward together with everyone's needs in mind. What it doesn't mean is doing what Bernie has done repeatedly—throwing people of color under the bus in order to make white voters comfortable by denouncing "identity politics" and saying that racism didn't really influence white Trump voters. It was just "economic anxiety," he tells us.

It doesn't mean appeasing those who think abortion is icky by saying it's OK to be flexible on abortion rights. They are rights; what is there to be flexible about? There is no economic justice without racial justice and reproductive justice.

There is also no economic justice without safe communities that have fewer guns on our streets. Most of us in Jackson, including black gun owners like myself, know that but Bernie Sanders has been iffy about gun-control measures as black families have been victims of gun violence grieving and marching for our dead loved ones for decades.

Sanders needs to make up his mind if he's "in for a penny in for a pound" as the elders say. So far he's just playing the hokey pokey with social justice and, frankly, black people and especially black women don't need any more white so-called allies who do that.

Martin Luther King Jr. was many things but he was never a man who was flexible about human rights. He died working for economic and racial justice. He certainly wasn't a man who didn't understand intersectionality even before we had a word for it. The Poor People's Campaign is an intersectional vision.

Bernie Sanders' so-called "revolution" of mostly white people is not any such thing. As I write this, I am confused and insulted that our city and our mayor whom I've supported would bring this man to honor one of the most revered black leaders in our history. We're supposed to believe that Bernie Sanders has insight on the economic legacy and vision of Martin Luther King Jr. when he doesn't even understand the racism of white people and intersectionality?

I'm not here for it.

This town hall isn't special; they are taking the usual Bernie town hall and putting Martin Luther King's name on it. It's glaringly obvious, offensive and frankly it is just gross. This is especially true as our city is still refusing to address state-sanctioned violence in the form of a long string of police shootings since last summer with the mayor and police chief, so far, refusing to reveal the officers' identity or other specifics.

Jackson, let's really talk about economic justice and how it's tied to reproductive justice, gender justice, disability justice, racial justice, birth justice and criminal-justice reform. Otherwise, the discussion is incomplete. Bernie Sanders isn't the person who can have that conversation. He gets no invite to the cookout, none.