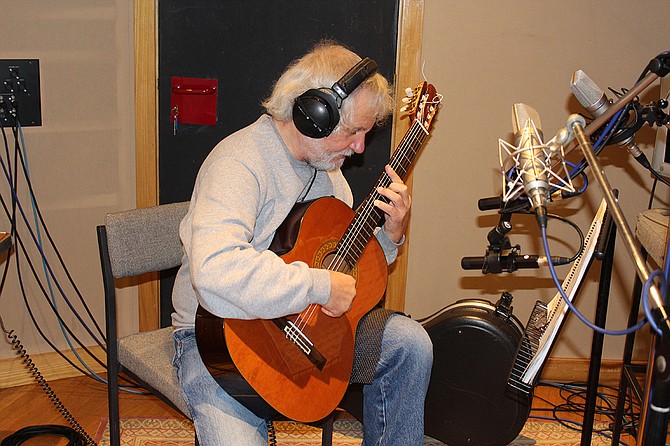 As a child, John De Chiaro often traveled with his stepfather, a shoemaker in New Jersey, into New York City to buy supplies, but on one trip, at about 5 years old, he wandered next door to a pawnshop and found an object that changed his life.

"There was a guitar on the wall, and I just, for some reason, wanted that guitar," De Chiaro says. "My stepfather said, 'Well, you can have it if you can pay for it.' So I started working with him in his shoe store, shining shoes, and I made the $11 I needed to buy the guitar. I wanted to take lessons, and he said, 'Well, then you better make enough money to pay for that, as well.'"

Eventually, De Chiaro began playing with rock bands until he came across yet another life-changing discovery while flipping through TV channels.

"I saw this fat hand doing what I now call tremolo (on guitar)," he says. "I didn't know what that was called, I didn't know who he was, or what he was doing, but I knew, 'Oh man. I want to do that.'"

He got rid of his electric guitar, and his sister's friend let him borrow her classical guitar, which he practiced on every day. When he went to Kean University in New Jersey, he decided to focus part of his studies on it, and in 1975, he earned a bachelor's degree with three majors—guitar, string bass and music education. A year later, he made his debut at Carnegie Hall.

Since then, De Chiaro has performed solo and with various orchestras around the world, including concerts for former President Bill Clinton and Pope John Paul II, but he also made a name for himself as a music educator. After receiving a master's degree in music performance from New York University in 1981, he accepted a position as the University of Southern Mississippi's professor of classical guitar, a title that he held for 25 years before retiring.

De Chiaro's retirement has been far from quiet, though. He currently lives in Louisiana, where he has led multiple choirs, taught music at numerous schools and founded two youth orchestras. Through his work, he became friends with composer Kermit Poling, who is also a conductor with several orchestras, including the Shreveport Summer Music Festival Orchestra.

"I came and played a concerto with them, and I heard one of his string pieces," De Chiaro says. "I just fell in love with it the first time I heard it. I thought, 'Oh my god.' So I asked him if he would write a guitar concerto for me because I was so impressed with the way he wrote it."

Soon after, Poling composed "Concierto De Chiaro," which he named for his friend and its rough translation to "Concert of Light" in Italian. In January, they tracked the concerto and Poling's second string suite, "Along These Footsteps to Paradise," with the London Symphony Orchestra at Angel Record Studios. Centaur Records will release both as an album on Nov. 3.

Jackson audiences will have a chance to preview the recording at De Chiaro's free concert at the Belhaven University Center for the Arts (835 Riverside Drive) on Tuesday, Sept. 12, at 7:30 p.m. The performance also features his guitar arrangements of works from composers John Dowland, Fernando Sor, Isaac Albeniz, Felix Mendelssohn and Scott Joplin.

"The joy for me is to take something that nobody would expect to hear on guitar and make them hear it," he says. "It's interesting because people will say, 'Boy, somebody should transcribe that for piano.'"