From Ireland to Jackson 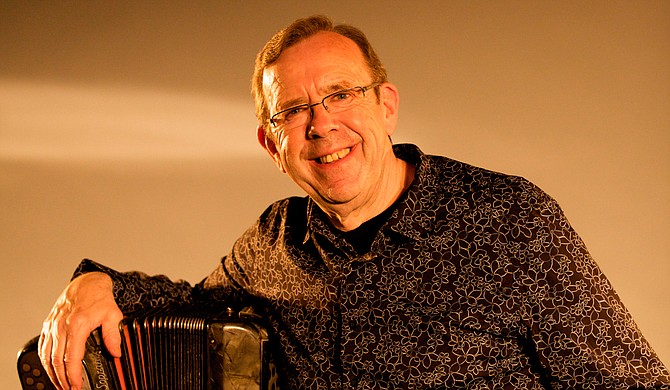 Accordion-player Paul Brock has been a professional musician for the past decade, but his pursuit of traditional Irish music has spanned almost his entire life. As for how long that is, he replies with a chuckle, "Well, I'm over 21."

As a young child growing up in Athlone, a town in the Irish Midlands, Brock would often visit his uncle's shop, which sold radios, bicycles and musical instruments. On one trip to the shop, Brock noticed an accordion in the window and asked his uncle if he could look at it.

"He handed me this small accordion, and I started messing around and trying to play a pop tune of the era, which was called 'How Much Is That Doggie in the Window?'" Brock says with a laugh. "That's what got me started. Simple as that."

Soon, he got his own accordion after begging his father, who then connected him with family friend Frank Dolphin, who was a fiddle player from Sligo, Ireland. The veteran musician took Brock under his wing and taught him a repertoire of traditional Irish music, also introducing him to the works of great Irish-immigrant players in the United States.

Brock says: "We've been exporting musicians to America for a very, very long time, and America has played a very important role in the development of our music because the musicians who came out here got opportunity, they got employment, and their arrival coincided with the whole evolution of the entertainment industry (in the U.S.) and the recording industry in the late 1800s and early 1900s."

Teaching listeners about the strong cultural bonds between Ireland and the United States has since become an integral part of Brock's work because he is not only an entertainer but also an educator.

Through meeting Americans over the years, he says he learned that many also have a keen interest in the context and background of the music, so those elements have become part of his career.

Thus far, Brock he has performed and led workshops for more than 200 U.S. universities in more than 36 states.

"We do lots of music-appreciation classes, we do workshops where we teach students the repertoire style and technique of Irish music, and talk about it, and we do master classes for advanced students," Brock says.

One of the things that makes his current group, the Paul Brock Band, appealing to universities and to audiences, in general, is its range of instrumentation, he says. In addition to the button accordion, the group features fiddle, banjo, mandolin, guitar, an Irish drum called a bodhran, melodeon, dance and piano, providing a wide cross-section of Irish music culture.

The Paul Brock Band's current U.S. tour comes to Jackson on Friday, Nov. 10, as part of the Celtic Heritage Society's concert series. However, it won't be Brock's first time to visit the capital city, as his other project, the Brock McGuire Band, performed with the Mississippi Symphony Orchestra in March 2014 for a concert benefitting the McCoy House for Sober Living.

"We're back for the first time since then—that's a couple years back. We have connections in Jackson, and we're really looking forward to going back there. ... Two contrasting things: one onstage with a full symphony orchestra, and this time, just four of us," he says with a laugh.

The Paul Brock Band performs at 7:30 p.m., Friday, Nov. 10, at the Fairview Inn (734 Fairview St.). The doors open at 6 p.m. Tickets are $20 per person or $15 for Celtic Heritage Society members at celticfestms.org. For more information, visit paulbrockband.com.