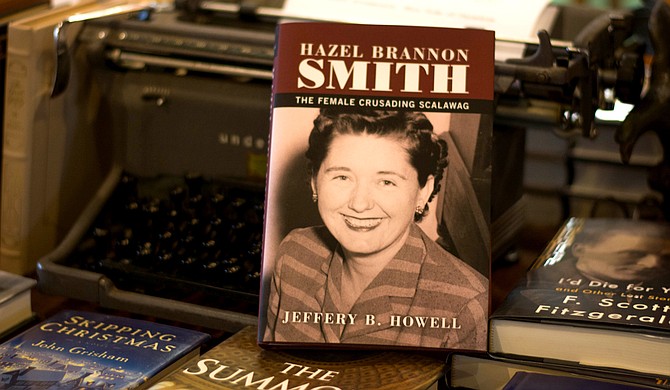 "I'd spend hours reading about these players," Howell says. "The school I attended was segregated, but there the library had biographies of Jim Brown, Willis Reed and Jim Chamberlain."

While growing up in Durant, Howell attended the now-defunct East Holmes Academy, and says he had never entered an integrated classroom until his freshman year of college at Holmes Junior College (now Holmes Community College).

"When I was 14, I began to develop what I call a 'racial consciousness,'" Howell said in an interview. "I worked in my dad's grocery store alongside African Americans, carried groceries to their cars, and most of the people who came into the store were black. I thought, 'If I can carry this lady's groceries, then why can't I go to school with her son?'"

Howell was born in 1965, which was 10 years after Pulitzer Prize-winning journalist and Lexington Advertiser owner and editor Hazel Brannon Smith fought, first, corrupt bootleggers and then the racist Citizens Council in Holmes County as Mississippi struggled to integrate.

He didn't know much about Smith when he stumbled upon the Hazel Brannon Smith collection at Mississippi State University. He was stunned to see what she had accomplished—she was the first woman to receive the Pulitzer Prize for editorial writing—and wrote his master's thesis on the Civil Rights Movement in Holmes County, with a chapter on her.

His biography on Smith, "Hazel Brannon Smith: The Female Crusading Scalawag," explores the complications of Smith's racial ideology and involvement in the Civil Rights Movement and stance against racial violence, which led white advertisers to boycott her once-thriving paper, ultimately leaving her to die penniless.

The irony? "(She) never advocated for integration," Howell says. "When she wrote her editorial that won the Pulitzer Prize, she reminded her readers of that."

She did, however, become friends with civil-rights leaders Medgar Evers and print the Movement newspaper he started, the Mississippi Free Press.

Howell says Smith initially had the same prejudices as white peers, but had developed a progressive viewpoint at the University of Alabama of a newspaper's need to serve society. "Hazel said she didn't support the slaying of black people," he says. "She supported the health of the community, and anything that threatened that, she would run on the front page of her newspaper. She came to see the Citizens Council as a detriment to the community."

An executive member of the Citizens Council, Wilburn Hooker, said of Smith in a letter to Albert Jones of The Mississippi Sovereignty Commission that a "domicile female crusading scalawag is in our midst." White southern racists historically labeled other whites who did not agree as "scalawags."

Ultimately, Howell says that for the book, the title serves as a tribute to her bravery in a racially segregated South.