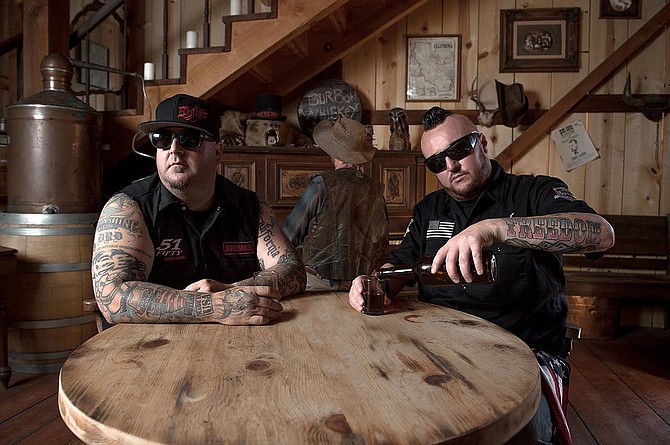 For some fans, country music is the quintessential “southern” sound, and yet, many of its stars hail from elsewhere. That includes Bird and Tex of country-rap duo Moonshine Bandits, a band that served as one of the earliest voices in the hybrid genre.

While Bird is originally from Tishomingo, Miss., he and his family moved to central California in 1990. He and Tex, who was one grade ahead, met in high school and began making music together, though they didn’t take it seriously at the time.

“When we got out of high school, we kind of went our separate ways in college and stuff,” Bird says. “After about a year, we wound up coming back together and just tried doing something. We cut a four-song demo and started selling it in our hometown, and it blew up.”

In 2003, they recorded their first full-length album as Moonshine Bandits, “Soggy Crackerz,” which boosted the band’s popularity far beyond its home state. Even at that time, Bird says that he and Tex hadn’t really set out to make country rap. Instead, they were just writing songs that combined elements of their favorite acts, such as Tupac, the Beastie Boys, George Strait and Guns N' Roses.

“We just made the music that was right, you know what I mean?” Bird says. “We’re pioneers of what you hear on the radio today. Those people took what we’d done and made it to what it is today with Florida Georgia Line, Jason Aldean, all that stuff. But we never had an idea that, ‘Hey, we’re going to sit down and write country rap.’ We just made music the way we knew how and (did) what felt right.”

Moonshine Bandits - "Take This Job and Shove It"

Moonshine Bandits’s seventh album, “Baptized in Bourbon,” hits shelves on Friday, March 3, and features a variety of big-name guests, including Crucifix, Bubba Sparxxx, Uncle Kracker and Average Joes Entertainment label-mates Colt Ford and The Lacs. One of the most notable cameos on “Baptized in Bourbon” is outlaw-country icon David Allan Coe, who joins the Moonshine Bandits for their rendition of his hit song, “Take This Job and Shove It.”

The band's fans are spread all over the United States and around the world, and many popular artists have entered the country-rap realm and brought it more into mainstream music in recent years. However, Bird says the style is still divisive, even among country music fans.

At the same time, Bird says he still loves to listen to the past heroes of country music, including Merle Haggard, Johnny Cash and Waylon Jennings. Although he doesn’t want to force the style on anyone, he says, music is a platform of freedom and escape, and there’s room for the old and the new.

"Either you like it or you don’t like it,” he says. “You can always turn the dial.”