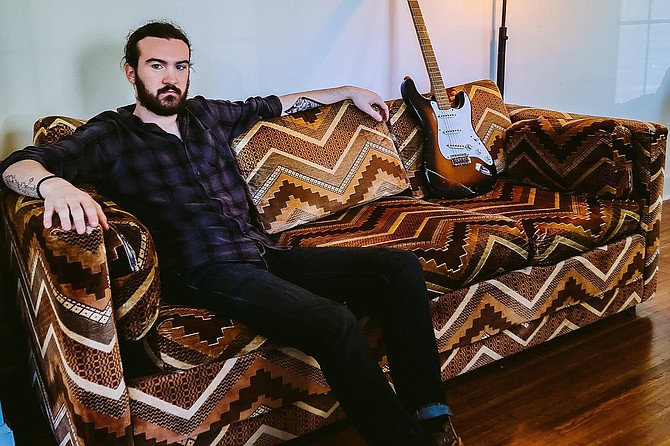 At age 20, Florida native Ben Sparaco has already amassed a highlight reel longer than many that of many older guitarists and songwriters. Since launching his solo career in 2015, he has shared the stage with members of established acts such as Mumford & Sons, Dead & Company, and the North Mississippi Allstars.

Sparaco grew up in a family lacking in musicians but filled with music fans, and says that at an early age, he became fascinated with the '60s and '70s music his parents would play, including The Beatles, Led Zeppelin, the Allman Brothers and Lynyrd Skynyrd. At 4 years old, Sparaco began taking guitar lessons. By age 11, he was sitting in with various blues and cover bands around southeastern Florida, and by age 15, he began writing his own music.

"I think part of it's just the natural evolution of being any sort of artist," he says. "You kind of want to do something that is your own, just to feel like you're making something fresh. As fun as it is to play other people's music, there's a point where it can get tiring because you've heard it all before."

During that time, Sparaco says he began studying other styles of guitar playing, including gospel, R&B, American and European folk, bluegrass and jazz, elements of which still appear in his music today. He also started focusing on the craft of songwriting, from the lyrical content to the way artists construct songs.

"That's kind of when I was like, 'I should probably start giving this a shot.' It wasn't good for a while. I'm still not sure if it's good to be honest," he says with a laugh. "But I think it was kind of a combination of boredom and expanding my musical horizons at the time."

He continued writing original music even after joining Crazy Fingers, a popular Grateful Dead tribute band in southern Florida, in early 2015. At that point, Sparaco says a career as a solo artist was still somewhere in the back of his mind, but through touring and playing with Crazy Fingers, he began finding his voice and learning to play onstage with a unit.

"It made me really hungry to lead my own band and kind of do my own thing," he says.

In August 2015, just a day before he moved to Nashville, Tenn., Sparaco formed a backing band and launched his solo career. Since then, he has played more than 100 shows and released two recording projects, an EP titled "Bring the Jubilee" in spring 2016 and his debut full-length album, "Wooden," in January 2017.

However, Sparaco says that Jacksonians can anticipate a wide variety of sounds when he and his new touring band, The New Effect, come the capital city on Dec. 29. Whereas "Wooden" featured a seven-piece bluegrass-rock band, the latest iteration that he has been touring with over the past year is a four-piece soul-rock group.

The change to a smaller, more permanent lineup has been a positive one, though, he says. Fans can hear the first fruits of that on Sparaco's latest single, "There Is No Them," which he released on Dec. 6, and later on his sophomore album in March 2018.

"We've really started to work out some new songs on the road, and everybody's voice can be heard a little bit more on these new songs because we've actually lived with them for a while," he says. "So we're really excited to get in the studio and make a record ... instead of me writing the songs, handing them to session players and hitting 'record' right away."