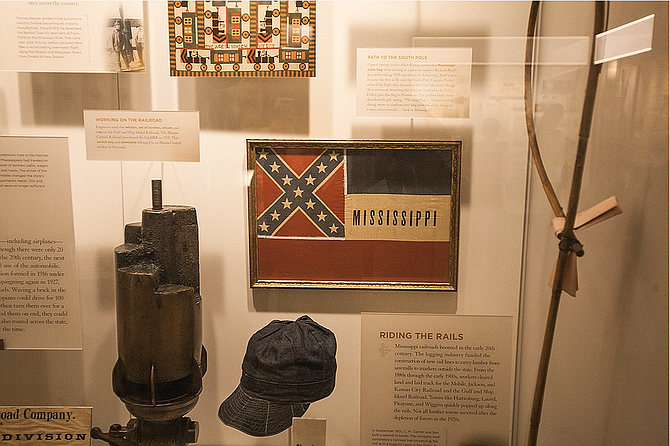 Admittedly, Mississippi Civil Rights Musuem has more of a national draw. I had several friends and family members in other parts of the country text or email me about it, and ask whether I got to see the president. (I did not). But having served on the scholarly review committee for both museums, I can attest that while both are extraordinary institutions, the Museum of Mississippi History is potentially the more revolutionary. Photo by Stephen Wilson.

This past weekend, national media descended on Jackson for the opening of the 2 Mississippi Museums, especially after it was announced that President Trump would be taking part in the festivities. There were segments on CNN and MSNBC, features in The New York Times, Washington Post and many other outlets exploring the controversy about his visit to the Mississippi Civil Rights Museum.

Virtually all of the features focused on the civil-rights museum, which received most of the attention—my joke on Sunday was to ask, "when are they dedicating the other museum?"

Admittedly, that museum has more of a national draw. I had several friends and family members in other parts of the country text or email me about it, and ask whether I got to see the president. (I did not). But having served on the scholarly review committee for both museums, I can attest that while both are extraordinary institutions, the Museum of Mississippi History is potentially the more revolutionary.

After plans for the two museums were announced, I heard from more than one person that the museums would be "separate but equal," one "for us" and one "for them." (The meaning of us and them varied based on the race of who was talking). Certainly, the civil-rights museum presents a bracingly honest account of the violence of white supremacy and the tremendous heroism of the activists who transformed our state against tremendous opposition. You will be hard-pressed to experience the "This Little Light of Mine" installation without getting emotional. But if some Mississippians don't know enough about people like Vernon Dahmer, Fannie Lou Hamer or Medgar Evers (and they will learn more about them in the museum), most understand the movement's basic outlines.

By contrast, our state's history is still enshrouded in mythology. The Museum of Mississippi History shatters these myths. White Mississippians expecting to see "our story" in the Museum of Mississippi History will be taken aback. As they sit in the introductory theater, they will hear narrator Morgan Freeman quote from the 1861 Declaration of Secession, confirming that Mississippi leaders were leaving the U.S. in order to protect slavery; they will learn that slaves made up a majority of the state's population in 1860, and that "redemption" after Reconstruction came about through violence and fraud.

This accurate, inclusive vision of our state's history informs the exhibits throughout the museum. In addition to recreating the home of plantation owners, they also recreate a slave cabin. In the museum's text, "Mississippian" doesn't automatically mean a white person. African Americans do not suddenly appear during the Civil Rights Movement; rather, they are a central part of our state's narrative, from the arrival of the first enslaved Africans to the present day.

History in Mississippi has long been contested terrain. John R. Lynch, the black Republican who served as speaker of the Mississippi House of Representatives during Reconstruction spent much of his later life fighting against the "Lost Cause" narrative of the Civil War and Reconstruction that had taken hold across America. The Confederate monuments that were installed in front of public buildings throughout Mississippi in the early 20th century presented only a narrow perspective on our state's history; other parts of our history, especially those of African Americans like Lynch, were purposefully excluded.

The Museum of Mississippi History gives voice to the full diversity of our state's stories. The museum does not give a slanted account of our past, but rather a full reckoning—both the inspiring and the ugly. Perhaps it's the historian in me, but I've long felt that Mississippi will not truly thrive as a united community until we have a unified story of who we are and where we've been.

For too long Mississippi has had two versions of its history. Despite what many assume, the two museums do not perpetuate this. Rather, their dedication presents a remarkable opportunity to come to terms with our past and chart a better future for all Mississippians. Do not skip the history museum because of what you assume it includes. I promise, it will inspire people to rethink their understanding of our state's past.

Stuart Rockoff is the executive director of the Mississippi Humanities Council. He lives in Jackson with his wife, Susan, and his two daughters.