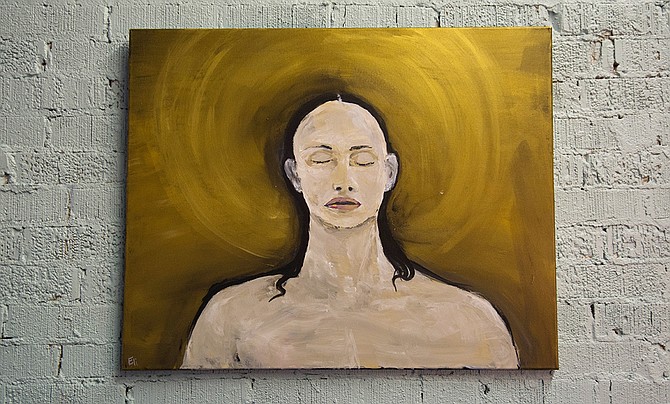 Jax-Zen Float has partnered with local artists such as Eli Childers for its artist program, which allows artists to do the floatation therapy in exchange for them creating art. Photo courtesy Cam Bonelli

Because floatation therapy is designed to let an individual enter a deep state of relaxation, Jason and Jina Daniels think the practice can help artists boost their creativity.

The Daniels are bringing together relaxation and art at wellness and creativity center Jax-Zen Float in midtown through the business' new float creation program, which lets artists participate in floatation therapy in exchange for them creating art.

For floatation therapy, participants get into a float tank, which is a light-and-sound-proof pod that encloses the participant. The float tanks have nearly 200 gallons of water with 850 to 1,000 pounds of pharmaceutical-grade Epsom salt dissolved into it, and the salt-water solution creates an anti-gravity environment. The water remains also close to the body's temperature (around 93 degrees) and the air inside the chamber, which results in sensory deprivation, allowing the person to enter a physical and mental state of relaxation. The sessions in the tanks last about 90 minutes.

Jina says the pair knew that an artist program was something they wanted to do at the float center.

"We just had to get everything finalized," Jina says. "Right now we have two programs. (The first is) visual arts, and we are still working on the music program. Eventually we want to play the artists' music created during the program while people are using the float tank."

Jina says the goal of the float program is to nurture the creativity in others and to learn from their experience within the float tanks.

"We want to help artists, but it's kind of an experiment," Jina says. "Everyone reacts to floating differently. Sometimes it helps someone work out a lot of ideas, and other times it allows them to get much needed rest."

"Our hashtag is #NurtureTheFlow, and we want to do just that with the artist program," Jason says.

Jax-Zen Float is currently accepting applications to the float creations project. Interested artists should go to jax-zenfloat.com and review the Artist Program Agreement, and then send an email to [email protected] with a description of the person's work along with photos and websites, social media and other links, and write about why he or she wants to be involved.