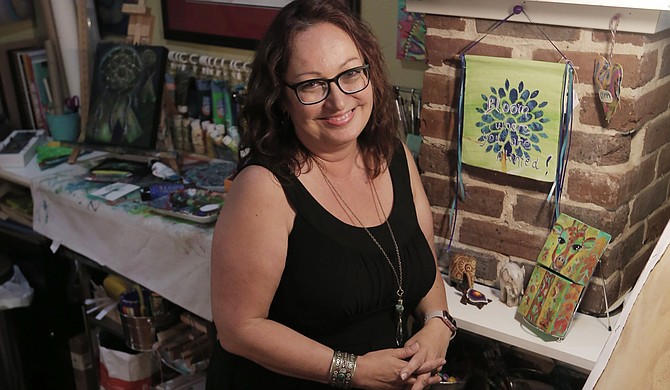 Jina Daniels' paintings surround her on every wall as she sits in her kitchen, which doubles as an art studio.

"I always felt creative, and I would try to do creative things in my job, but it was very corporate," she says.

Daniels began her journey with art while living in Nashville, Tenn., when she first started going to classes that creative-arts coach Whitney Freya taught. These classes allowed Daniels to face her fears and let out the creativity she knew was inside her. "I always wanted to do it but I was afraid of that big, white canvas, and didn't know what to do," she says.

After Freya moved to Oregon, Daniels pulled away from art for a while. During this time, she was offered a position in Jackson as an insurance sales manager for Nationwide Insurance. So Daniels, her husband, Jason, and their now-6-year-old son, Jenner, packed up and headed south in December 2012. A little more than a year ago, she got back into her creative side, thanks to a retreat that Freya hosted.

"It was just like this really cool thing, and in the meantime, she was also teaching us her formula, and that kind of flipped the switch; it changed everything," Daniels says.

Since then, she has made many changes in her lifestyle thanks to what she learned during her time with Freya, who once told her that life was just like a canvas, and that if there was something she didn't like, all she had to do was change it. This motto stuck, Daniels says.

After the retreat, Daniels and her husband, who performs with the Jason Daniels Band, began brainstorming ideas for a way they could combine her love of art and his love of music into one business. About six months ago, they started Jax-Zen, a creativity-coaching workshop and event company, as a way for the Jacksonians to tap into their right brain with the help of the arts. Her favorite part of their new business is working on community-based art projects, such as the community canvas.

"We kind of went back to our love of community, so we started doing what we call our community canvas, and we are trying to do these at different events," she says.

The purpose of these canvases is to give the community a chance to express their own creativity as they add their own touches to the giant painting.

Now that she has found her creative side, Daniels wants to figure out the best way to help others find the same. "By tapping into your creativity, it really helps you step out and do the things that you may never do, so you kind of get rid of that fear, and you're like, 'I can do that,'" she says. "So that's what it really boils down to is trying to get people to step out of their comfort zone and tap into this thing that's in all of us. For me, I thought I had to pick either my job or this creativity thing, and I don't have to pick. I can do it all."