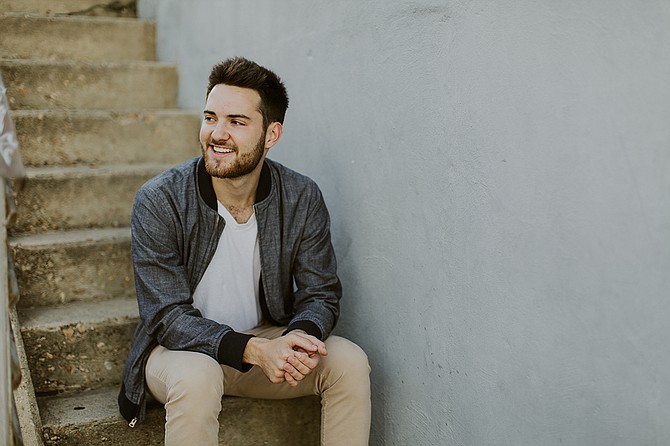 Like many performers, pop and soul artist Sam Mooney was infatuated with music from a young age. However, the connection wasn't instant.

When he first began learning to play piano at age 8, the Brookhaven, Miss., native says that he was interested, but it wasn't the passion that it has become. Often, he would find himself practicing out of obligation to his weekly lessons.

"What really turned it around for me was when I got my first keyboard," he says. "It wasn't even a really great one, but my parents got me a good starter keyboard, which was awesome because I could practice 24/7, plug in headphones and play at 11 o'clock at night."

Another contributing factor was the type of music that he listened to, he says. In 2004, Mooney, who is the second youngest of seven siblings, was riding with his older sister, Mary Grace Fontenot, to the Egg Bowl, and she played him Ray Charles' "Georgia on My Mind." It floored him, he says, and he began seeking out other iconic R&B and blues artists, such as Dr. John.

"I started writing songs in junior high and high school, and was still mortified to sing for anyone," Mooney says. "Like, singing was not even on the radar at 14. I had kind of imagined myself doing it but wouldn't actually do it."

As he got older, he broke through his stage fright and started performing more often. He says the biggest push came in 2013 when he completed a summer performance program at the Berklee College of Music and also won the Mid-South Fair Youth Talent Contest, which came with $2,000 and a trip to Los Angeles to meet with industry professionals.

In early 2014, Mooney recorded his first EP, "Somewhere in Between," which he released in July of that year. His follow-up, "Find My Way," came out in April 2016. His current string of shows, the Southern Starlight Tour, takes its name from that EP's lead-in track and comes through Jackson on Aug. 3.

While both EPs proved successful—his debut reached No. 1 on iTunes' Singer-Songwriter EP chart, and his sophomore EP reached No. 3 on that same register—Mooney says that he wants to go a different route on his next project, which he will start recording this fall.

"I started with two EPs that I'm really proud of and that were the right move for the time, and I'm really glad I did them," he says, "but now, I really want to make a full-length album. It's tempting to just put singles out, and that may be the strategy after this album, but I do feel a strong pull to make a cohesive full-length album."

Mooney, who is currently a senior at the University of Mississippi, says that one exciting prospect of a full-length is the creative real estate it will give him. With the limited number of songs on his EPs, he wasn't as able to consider the overall experience with each release, but with an album, he can tell a bigger story, he says.

"With the first (EP), I kind of lined it up so that there's a pretty cohesive listening experience if you literally go track one to six, but if you put it on shuffle, you'd be like, 'Wow, that's a change,'" he says. "... I wanted to put out a sampler of things I like. The second one had a small element of that but was certainly narrowing toward the soulful pop.

"I think on this one, I want to narrow even more, but also branch and do a lot of different things I haven't done yet. I think this record will be pretty different from my stuff overall so far."