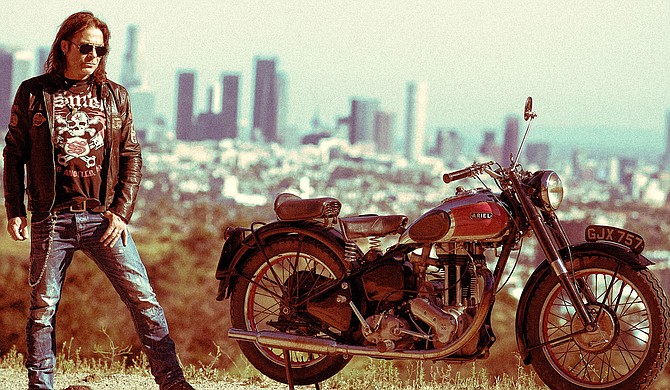 From the flag-clad troubadour on its posters, to its rock-heavy lineup, to the title of the event itself, Freedompalooza is clearly going all in on its all-American theme. However, that doesn't mean that everyone performing for the event will actually be American.

The inaugural acoustic music festival, which takes place Sunday, Sept. 11, at The Hideaway, will feature acts such as Lillian Axe, Burnham Road, Spank the Monkey, Spunk Monkees, Joey Culver, Doug Hurd, Larry Brewer, Chad Wesley, Jason Turner, Stevie Cain and Chad Perry, to name a few. Perhaps one of the biggest names from the lineup, though, will also be the furthest from home.

Freedompalooza is one of many stops on the road for Copenhagen, Denmark, native Mike Tramp, whom hard rock and glam-metal fans may know as the former vocalist for White Lion and Freak of Nature. The singer-songwriter is currently on a solo American tour in support of his latest album "Nomad," which he released in August 2015 on Target Records.

"This is my fourth tour in four years where I'm basically crisscrossing the United States in a rental car with just my guitar and bringing the ... show to the people, you know—telling the stories from the past, playing the songs in possibly their original form and how they were written," Tramp says. "... It's a great thing just to take part in a unification of music, in general. It could be anything. In this case, it's Freedompalooza, and I'm happy to be part of anything that keeps live music flowing."

Like many Freedompalooza performers, Tramp is not traditionally an acoustic artist. Even the songs on "Nomad" are full-band affairs, but he says he has enjoyed presenting the tracks in the more intimate acoustic format on recent tours, especially for those who remember him best from his work with White Lion, rather than his 10 solo albums.

"They see the man that is behind the songs," he says. "I'm not completely sure if anyone shows up to my shows a skeptic or not knowing what they're going to get, and I'm not the only one out there doing acoustic, but I am the only one doing it the way that I do. I think people notice that, and people always comment on it after the show."

Tramp says one of the biggest things he's learned since the glam-rock glory days is to enjoy the journey and the art of music instead of seeking mainstream success. He says that when he was a young man in Copenhagen, he was walking down the street and saw a man painting through a window. He got the man's attention and asked how much the paintings sold for, and the man said they weren't for sale. "Then why do you paint?" Tramp asked, and the man replied, "Because I love it."

Tramp says it's something that he didn't understand at the time, and didn't completely understand for many years after. First, he needed to experience life, in order to write about it and share it with others in an honest way.

"As a human being, I've always had my feet on the ground and enjoyed being out there and facing people when it's possible, and I've never played the rock-star personality," Tramp says. "It's probably more because, to tell you the truth, I wasn't made for it. But I'm a damn good songwriter, and there are very few of my companions from that time period that write lyrics and honesty like I do. So therefore, I emphasized on that, stood my ground and said, 'This is who I am. Like it or not, it ain't going to change.'"