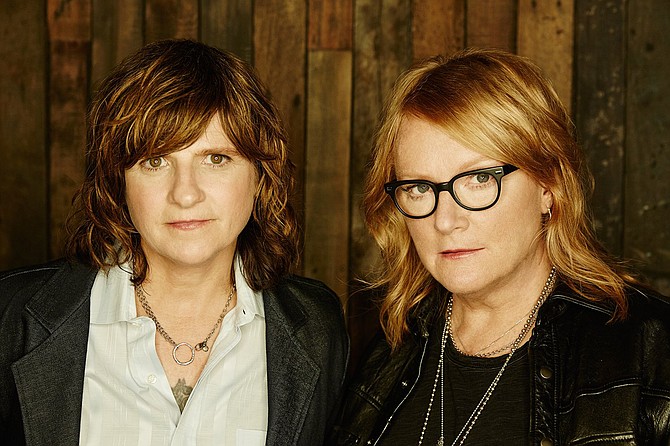 For nearly three decades, folk musicians Emily Saliers and Amy Ray of the Indigo Girls have been near-household names for their work in the music industry and in activism.

Saliers and Ray cemented their status as folk staples with a hot streak that spanned much of the 1980s and 1990s. During that stretch, the Indigo Girls released two platinum records, three gold records and a double-platinum self-titled record, which also earned them the Grammy Award for Best Contemporary Folk Album in 1990.

Fortunately for fans, the Indigo Girls didn't decide to coast on past achievements, releasing two more platinum records and four more gold records. In June 2015, the duo put out its 14th studio album, "One Lost Day," reaching No. 7 on the American indie and rock charts and No. 2 on the U.S. folk chart. Their latest tour brings them to Jackson for a two-day stint at Duling Hall.

The Jackson Free Press recently spoke with Saliers over the phone to discuss the success of "One Lost Day" and where the Indigo Girls find themselves today.

With the album having been out for a year and a few months now, what has the reception been like?

Really, really strong, and it's cool because sometimes it takes a while for new songs to stick. But we get a lot of request from the live shows for new songs. The really cool thing is that all the songs on the record—except for one that we don't play as much—all of them, we can rotate and play live on the current shows. And sometimes, when the record comes out, you get three or four that really stick, and then the others just kind of lie and wait. When you pull them out, they're just more obscure choices. So we've been really happy with the fan response to the songs.

Playing the new music alongside your past releases, do you feel like they fit together well?

I think so. I haven't really asked anybody that, but just based on the emotional response to the songs, and you know, I'm fascinated by what happens in the brain when you hear a song a million times and like it more than one you just heard. ... When you put everything into a new record, you always hope that your listeners will take the songs and stuff, but I think this record in particular has had real sticking power, as far as the songs just coming out and being immediately accepted in the discography.

With "One Lost Day" peaking at No. 2 on the U.S. folk charts, what did that mean for you and Amy?

I didn't even know about that number, so that's pretty cool to hear! You know, I think that really we want to keep producing music, so we're always writing. We don't just want to stop and, "Oh, well, we've been around this long, and we're done." We feel very alive and active, and music moves us. We love other bands, and we're big music fans, both me and Amy. ... But internally, Amy and I feel as much in it as we've ever been, so I'm really grateful that we still have people coming out to shows, and we really are maintaining a vibrant career. Every day, we just say to the people out there, "Thank you for coming." Last night, we had this just diverse crowd in San Diego: young and older and middle, men and women, queer and straight, and it was just lovely.

What was biggest difference in the way you approached "One Lost Day" compared to your previous albums?

One thing we had to do was work really quickly because we had a budget and only have so much time. Some of (what) happened was that Jordan played a lot of instruments on the record. We actually had some things go down on track, not a lot, but enough that we were like, "Ugh, that feels uncomfortable that tracking is being done when we're not sitting there." So there were a bit of leaps of faith happening. But Jordan had created sort of musical landscapes of the songs when they were rough demos, so going into the project, we knew sort of what was going to happen musically, and we really worked hard. We didn't take any time off. I think we did it straight in 13 days or something. We just pounded it. It was tough. Making a record is really fun and gratifying, but it's not easy. It's pretty grueling.

With Indigo Girls being a well-known band with an established sound, what was it like to work with a newer producer with a new voice as part of your process?

It's really great, and it is a matter of trust. To me, it's just indicative of (the fact) that you don't need a producer who's done projects for decades and is an established producer, but you do need a producer who does what a producer does, which is have a musical vision and, for us, doesn't get all emotionally tangled but stays clear, steady and sort of guides the ship in a way. The cool thing about Jordan was that she plays a million instruments, and she's very connected to musical communities, and she just brought a new energy. She had produced Lucy Wainright Roche's last record, and both Amy and I are friends with Lucy and love that record, so that's how we decided to use Jordan. It's so nice to make a change and mix it up so long as you have that trust going and a producer (who) instills that trust and maintains it throughout the process.

What would you say you learned from your last record that you brought into "One Lost Day"?

The first thing that comes to mind about that is I have a song called "Learned It on Me," and I love beats and loops and sounds, like a lot of contemporary urban music. I just love all that stuff, and we've never really used that a lot in Indigo Girls. We're a little more the center of folk or folk-rock, so I'm getting ready to make a solo record that I'm going to record in December, and there'll be a lot of that stuff on there. I love arpeggiators. I just love them. And I said to Jordan, "I want an arpeggiator to loop in this song." She combed through tons and tons and tons of sounds and couldn't find anything that struck her. Then she found the loop that's on "Learned It on Me," and I love it. It's my favorite part of the song.

When many people think of the Indigo Girls, they think of your sexuality since both you and Amy have been open about that, even when there wasn't as much support for gay rights. What does it feel like now to be part of an LGBT community that has more of a voice and more support in the U.S.?

That's a really interesting question because we're quite convinced that the audiences are becoming more mixed because people are more comfortable to come out and experience it. That's something I never thought was going to happen—not that it couldn't happen, but it just never crossed my mind. Then, you look out, and you see a real cross section, and it's like, "Wow, this is really interesting," and maybe this is because people's minds are opening and their experiences are opening, and now it's OK for a dude to come to an Indigo Girls concert. And it always was! It always was, but things have changed culturally.

Honestly, you know, what people do is they put other people in a box. We all do it. We just say, "Well, that's the lesbian band," and there's a lot of stigma about being a lesbian with an acoustic guitar, which can infer somehow that your music is mediocre or whatever. We've had to do battle with that stereotype. But in the end, quite honestly, nothing matters (compared) to human and civil rights.

So as queer people and members of the community, it's been our privilege to be part of the movement—which is not over yet by any stretch. But we've come a long way, you know. I'm married to a Canadian, and we got to get married, and she has a green card, and that's because the legislation changed and because of all the hard work that people have done for acceptance.

Why do you feel that we don't see the kind of activism at the heart of the Indigo Girls in mainstream music as often now?

I think it may not be in the mainstream pop world, but you know, Pink's song "Dear Mr. President" (which came out in 2006 and featured the Indigo Girls) made quite a splash, and it actually made a bigger splash in other countries than it did in the U.S., as far as the charts go. As far as our audience, I don't think you want to hit people over the head with a hammer of heavy, heavy topics song after song after song, but the thing is, with me and Amy, these are things that we're interested in as people, and this is what we write about. And we know that the people who come to see us, they are interested in what's going on in the world and respond to those songs and those issues, and I can tell that they do.

I can only know from that that out there are just people who are interested in becoming a part of positive change and that music is a huge, huge part of that. So it's still alive and well, just maybe not in the mainstream pop world. I think most people want mainstream pop just as an escape, honestly. You want to feel good and want to be able to dance to it and listen to it and not have to think too much, and really, that's the way that pop has always been.

The Indigo Girls perform at 8 p.m., Tuesday, Sept. 13, at Duling Hall (622 Duling Ave.). Tickets are $45 and can be purchased at ardenland.net. The band's performance on Wednesday, Sept. 14, is already sold out. For more information, visit indigogirls.com.