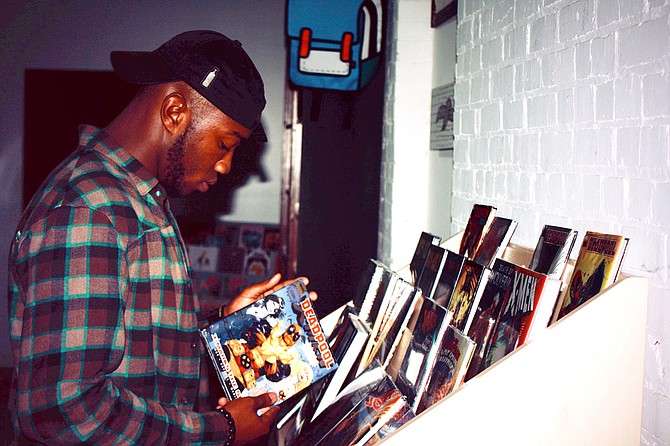 By day, Devin Cousin is busy with his courses at Jackson State University, where he is studying mass communications. By night, he's hip-hop artist devMaccc, a relative newcomer who has been gaining attention in the local music scene with his debut EP, "Euphoria," which he released in February.

As its title suggests, "Euphoria" is centered on the theme of joy, hence the album cover featuring a photo of Cousin from a childhood visit with his grandparents.   At the same time, the rapper says the EP tackles heavy topics such as doubt, motivation, the black experience, depression and hope for the future.

Since his first performance at Conkrete Sneaker Boutique in January, Cousin, a Jackson native, has become a common name at proving-ground venues across the city due to his high-energy performances, quality production and lyricism. Those traits earned him a spot as one of the official brand ambassadors for Phillip "DJ Young Venom" Rollins' comic, record and collectibles store, Offbeat, in midtown.

"It's a crazy feeling," Cousin says. "I feel like Nike and Lebron, having a brand behind you like that, having them trust you to represent them. Venom has given opportunities to a lot of artists working with different mediums here in Jackson. It's like a support system."

Over the past year, Cousin has also joined fellow Mississippi hip-hop artists Quavias Black, Josh Waters and  D. Horton, to create a support group of another kind—one that is based on creativity, collaboration and respect for each other's craft. The rappers shared the stage as part of the famed A3C Hip-Hop Music Festival in Atlanta on Oct. 5.

"D. Horton was one of my favorite rappers from Mississippi," Cousin says. "I first met him performing at Soul Wired Cafe but really got the chance to connect with him at an indie mixer event hosted by The Hood Hippie and TheBeatStop.com. The first show I did at Offbeat also featured Quavias Black, who brought Josh into the mix, as well. We bonded easily because we all had a similar artistic vision and goal for the music we were creating."

While "Euphoria" is still fresh on fans' ears, Cousin is already putting the finishing touches on his next project as devMaccc, "4THEPACK," which he plans to release in late November. The first two singles from the album, "The Key" and "Silent Wolf," are currently available to stream on Soundcloud, with more to come in the weeks leading up to the release.

"The concept for the album is really making a statement and letting it be known that I'm not just doing this for me anymore," he says. "I'm doing this (for) everyone around me that has been supporting me. It's just me showing love to my team and all of my collaborators."

D. Horton, Black and Waters will all appear on the new album, which also finds Cousin working with a multitude of young producers that he discovered through YouTube. These include Luke White and Ty Goods, both of whom have garnered thousands of subscribers by making original beats in the styles of contemporary hip-hop icons such as Chance the Rapper, Future and J. Cole.

"They're like rappers on Soundcloud," Cousin says. "They make quality music and just want a chance to be heard."

For more information, find devMaccc on Soundcloud or visit 4thepack.com.