Blues in Black and White 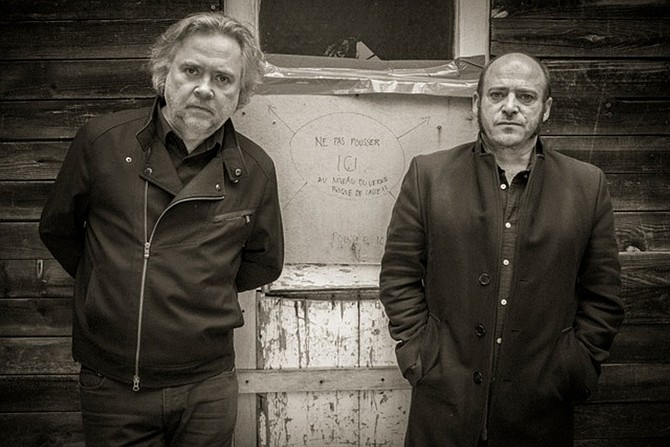 Mississippi bluesman Robert Johnson may have only lived to be 27 years old, but his legacy has grown exponentially since his death in 1938, inspiring many generations of artists. Of course, not all those he inspired are musicians, and certainly not all of them hail from the American South.

Although "Love in Vain" is the first published pairing of Dupont and Mezzo, it isn't their first time collaborating. The duo first met about 30 years ago while Dupont was a music journalist and Mezzo was a rock bassist and burgeoning illustrator. Some of Mezzo's first published artwork was for a magazine that Dupont wrote for.

"He started to do comics and things like that more, and we started to work on a story," Dupont says. "But we were young, and we didn't finish it. Then, he did his thing, and I did mine, and we got older and decided to finish what we wanted to do, which was work together and do a good story."

While Dupont left journalism and currently works as an advertising copywriter in Paris, Mezzo continued in illustration, becoming fairly well known in the French comic and graphic-novel world for his and author Michael Pirus' "King of the Flies" series. When Glenat, the publisher that released "Love in Vain" in France in 2014, approached Mezzo about creating a blues-centered book, he called Dupont and said it was time to work together again.

"It was a great surprise because it was a big success in France—a lot of press, radio and TV, and we've sold 40,000 copies in France," Dupont says.

"For that kind of book, it's a big surprise because I think that we wanted to do it for music lovers—blues and rock lovers—but the audience was quite beyond this. People who didn't know anything about blues and Robert Johnson discovered it."

He says an important goal for "Love in Vain" was to help readers understand that most popular music is rooted in the works of Robert Johnson and other blues originators. It was one of the things that Dupont says fascinated him about the subject: Despite being a product of one area, the Deep South, blues changed all music.

Dupont says his experience as a journalist helped him to delve into the context in which the blues was born, as segregation, racism and the classicism of Mississippi all influenced Johnson heavily. However, Dupont also learned quickly that there are three parts to any documentation on the late blues icon: facts, legends and things that may fall somewhere in between.

He and Mezzo decided to use those divisions in "Love in Vain," visually differentiating fact from fiction. This allowed them to use famous folklore about Johnson, from his deal with the Devil to his supposed death from poisoned whiskey. Dupont compares their treatment to the magical realism in William Faulkner or Harper Lee books, or in films like 1955's "The Night of the Hunter."

"That's the way Mezzo and I are trying to work. You take this guy, all the things you know about him, and you try to take this and tell the story as if he would be a fictional character, to have something very expressive and more artistic."