Martin and Lettieri: Risk and Reward 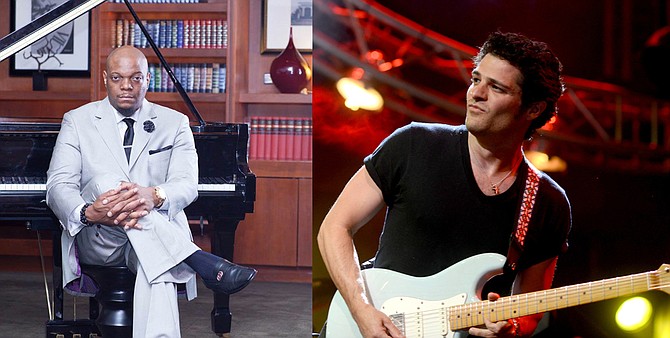 Shaun Martin and Mark Lettieri certainly have a lot of options for their fans to choose from.

Most recently, the pair decided to hit the road for a co-headlining tour in support of their solo releases—Martin's debut jazz, funk, gospel and R&B album, "Seven Summers," released in July 2015, and Lettieri's latest fusion-rock record, "Spark and Echo," released in May 2016.

Martin wrote and recorded "Seven Summers" over seven years, basing the compositions on the events he experienced during that time. This is even true for the many tracks without lyrics, such as "Madiba," which he wrote in South Africa on the day Nelson Mandela died. Instrumental music uses the same passion that a vocalist uses, he says. It's just about working with a different set of tools to convey it.

"I guess it's a matter of mentally marking that spot, marking that moment in time to kind of reinterpret it," Martin says. "It's almost like if you take a photo of this particular thing and share that photo with everybody. The photo never changes, but who you share it with and when you share it always does. That's kind of why I tried to create this snapshot of, 'This is what happened with this. This is how I felt here.'"

"Spark and Echo" is Lettieri's third solo release, following 2011's "Knows" and 2013's "Futurefun" EP. While he says he still enjoys the songs on those previous records, he felt that he was at a point as a guitarist, composer and producer where he could make a bigger statement. He put more time and a larger budget into ensuring the best sonic quality of any of his releases, while also focusing on the songs as compositions rather than just as opportunities to further prove his guitar skills.

The pair's styles might seem at odds on the surface, but Lettieri says he and Martin have more similarities than one might think. These go beyond their shared status as instrumental artists and the fact that they play on each other's records, into the roots of the music they write, he says.

"Shaun is kind of one of the originators of this, but we have a bit of that Dallas soul, R&B, groove sound, so it's almost like two different interpretations of it," he says. "Shaun comes definitely from a heavy jazz place, and then mine is sort of a more rock interpretation of it, but it still has kind of that Texas gospel-soul thing buried in there somewhere. It's almost like the audience is going to get two sides of the same coin."

Both composers say they're excited to be promoting their passion projects, but of course, taking two weeks from touring with big-name acts often means passing on other opportunities. Thankfully, Martin says, the musicians offering those opportunities tend to understand because they had to make that choice themselves.

"If you are really passionate about having something to your own name like we are, you just have to make yourself set aside the time to do it and kind of take that risk," Lettieri says. "If you don't take that risk and don't assume whatever loss would come with it, then you'll never do it."