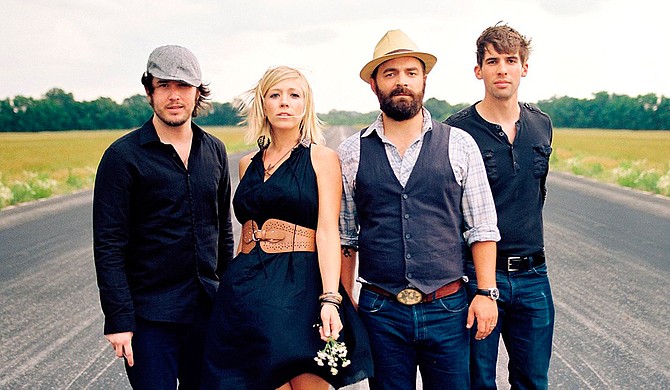 Tennessee native, father, husband and Americana musician Drew Holcomb has become an established independent artist, selling more than 100,000 records and performing more than 1,500 lives shows since releasing his first album, 2005's "Washed in Blue." Holcomb and his band, the Neighbors, are kicking off a long string of festival performances, including Shaky Knees Music Festival, which takes place May 13-15 in Atlanta, and Moon River Music Festival, which takes place Oct. 7-9 in Memphis and Holcomb himself will host and curate. While fans elsewhere wrangle tickets for his out-of-state shows, Jacksonians can catch Holcomb play for free at the annual Stray at Home Art & Music Festival on Saturday, May 7.

Growing up in a musical household, Holcomb says, he fell in love with the art form at a young age. His mother is a pianist who served as the household's alarm clock. The playing of gospel hymns on the piano meant it was time to get up and prepare for school. While Holcomb was in seventh grade, he received a guitar for Christmas, picking out the chords to Bob Seger's "Against The Wind" as the first song in his repertoire. However, he didn't start writing music of his own until he was studying abroad at the University of Edinburgh. Holcomb says he takes inspiration from a wide variety of great artists who came before him.

"Too many to name—anyone who works hard, tells the truth and keeps their humanity along the way (inspires me)," he says. "Johnny Cash and (Bruce) Springsteen are a few that come to mind."

Today, Holcomb resides in Nashville with his wife and frequent band mate, singer-songwriter Ellie Holcomb, and their daughter, Emmylou. Drew says being able to share the stage with his wife makes living the artist life a good fit for their family.

Even after years of performing and releasing new music, including his most recent album, 2015's "Medicine," Holcomb says mistakes still happen, of course. He says the best course of action is to laugh it off and keep plugging along. "Mistakes in music are what makes music have some humanity," Holcomb says.

Holcomb and the Neighbors will be headlining Stray at Home this year, performing alongside artists such as Young Valley, Rock Eupora, Rooster Blues and the Vibe Doctors, and he says he is looking forward to coming back to Jackson. Growing up in Memphis, Holcomb says made many friends who have ended up in Jackson, and he is looking forward to seeing them.

Holcomb says he has seen a lot of artists cancelling shows in North Carolina following HB 2 and Mississippi due to HB 1523, but rather than refusing to perform for audiences in either state, he hopes that his music will help foster a deeper understanding.

"I am not going to throw a whole state full of people under the bus and boycott Mississippi," he says. "I do the most good by showing up and playing my music, which hopefully will continue the conversation on what it means to love your neighbors and try to see the world through someone else's eyes. The best songs make people think and feel, hopefully more than they did before they heard the song. ... My hope is that we can have some civil discussion between each other as citizens of the same place and learn to understand each other's points of view."

Drew Holcomb and the Neighbors perform for Stray at Home Art & Music Festival, which is from 11 a.m. to 7 p.m., Saturday, May 7, at Smith Park (302 E. Amite St.). Admission is free, and all ages are welcome. For the full event schedule, visit strayathome.com.