Rep. Karl Oliver, R-Winona, made waves last week when he told a Mississippi resident that he "could care less" about her concerns about budget cuts, suggesting she leave Mississippi, in a response to an email she sent to all representatives in the House. Oliver is a freshman representative who was able to raise in excess of $25,000 in the 2015 election cycle, campaign-finance records show. He raised less than his Democratic opponent in November's election race, Ken Strachan, who raised more than $38,000. 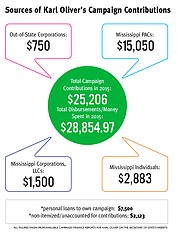 Oliver won the race with 56 percent of the vote and replaced veteran lawmaker and Republican Rep. Bobby Howell, who served in the House for 24 years. Oliver received campaign contributions largely from Mississippi PACs.

The Mississippi Association of Realtors gave Oliver $2,500, 2015 campaign-finance records show. Koch Industries and the Mississippi Manufacturers Association also donated to his campaign. The breakdown of where the money came from is to the right.