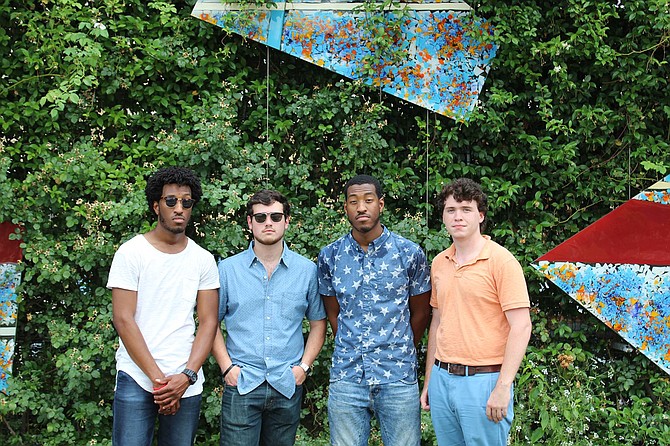 Vincent says he and his band mates wanted their first recording project, "The DAEH EP," which they released Friday, June 3, to introduce new listeners to that dichotomy of styles, which is at the center of the CUT.

"It was just kind of like, 'How can we put all that into something short and sweet for people to know and to be like, 'This somewhat represents what we do'?" he says. "We tried to pick a couple songs that we hope when people hear it, they'll think, 'OK, that conveys a good melting pot of music.'"

Even the band's formation was something of a melting pot. The musicians all knew each other through band at Madison Central High School but first played as a group in May 2013. At the time, Wright and Vinson were performing with Brick City Gentlemen and needed an opening act for an album-release show. They asked Vincent to put something together. To make sure he could fill an hour, he recruited his brother and his friend Atkinson, and then reached out to Wright, who would already be at the show, to complete the lineup. After that initial performance, friends kept asking when they were playing together again, prompting them to make the CUT official.

When the musicians began self-producing "The DAEH EP" over spring break this year, they chose to work on updated—or outright new—arrangements of five songs that they had been performing for a while, adding additional instrumentation, from auxiliary percussion to dueling saxophone solos, to present the excitement of the CUT's performances without simply imitating a live show.

"Live bands, when they want to do albums, they say, 'We want to capture the energy of our live music,' and it's very difficult to do that," Wright says. "Unless you literally have a live recording, it's very difficult to replicate the same energy by just playing what you'd play in a live concert situation. ... A lot of times, the way to gain back that energy is to add extra layers, more detail, to those recordings to add interest in a musical and compositional way that you can't do live and don't need to do live because the energy of live music is there to begin with."

Vinson was initially worried about that approach on the song "Medic," which went from one of their most bare-bones tracks to "weird," he says. There were about five different versions of the guitars and three versions of the keyboards, some of which were accidental. Thus far, Vinson says, "Medic" has been one of the songs that listeners have most responded to, which he attributes to letting the recording have its own creative energy.

"For so many people, (with) current music, you go to a live show, and you're kind of disappointed almost because music is so produced now," he says. "What you hear on the radio and what you go hear in a live concert, you're almost like, 'Man, this is just not the same,' because people try to replicate it, and you shouldn't. This is my personal opinion, but you shouldn't want to replicate a live sound in a recording because your recording is meant to be your creative juices flowing into that recording."

The musicians say one of the most surprising discoveries from the release has been the fan reaction to the EP's hidden outro, which features a single acoustic guitar and all four members providing vocals. Listeners can expect that natural ambiance to transfer to the CUT's first full-length, which the band will record later this summer.

While the CUT has greater plans for its studio recordings beyond "The DAEH EP," the release has helped the band mates understand how much they can accomplish with good planning and a willingness to work outside their comfort zones.

the CUT's "The DAEH EP" is available now through most major music-download services. For more information, visit thebandcut.bandcamp.com.