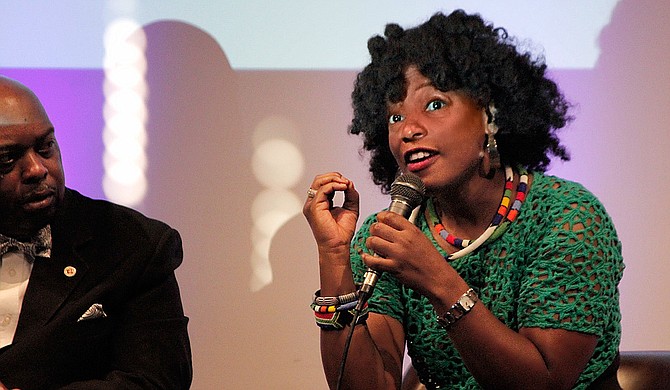 Actress and Mississippi native Aunjanue Ellis spoke at a Conversation on Race panel on June 9 at the Smith Robertson Museum and Cultural Center. She, along with other community advocates, will hold a rally on Tuesday, June 14, in Washington, D.C., urging the U.S. Congress and President Barack Obama to take down the Mississippi flag. Photo by Arielle Dreher.

JACKSON — Last spring, actress and Mississippi native Aunjanue Ellis made waves by stepping out on the red carpet wearing a dress bearing the phrase, "Take It Down Mississippi." Since then, she has taken a public stance against the state flag and organized a rally at the U.S. Capitol on June 14 for activists to take a stand against the message of hate. Speakers include Ellis, musician Genesis Be, professor Dr. Michael Eric Dyson and attorney Carlos Moore, who filed a lawsuit against the state for the flag saying that it is unconstitutional and discriminatory. Ellis recently spoke to the Jackson Free Press by phone on heritage, hate and bringing down the flag.

How did you get started with Take It Down and the whole movement for taking down the state flag?

I've had an emotional sort of disconnection between the flag, since I was very young. It was emotional, and then I went to school, then I returned home and it became ... just very jarring for me because I felt like it was an expression of arrogance about white supremacy. I really strongly felt that race and racism are problems all over this country, but there's a particular kind of arrogance in Mississippi that I feel is unacceptable. It physically made me uncomfortable, and it's because it's hard when you live somewhere, and you love it, but then you have this image of something that is so the opposite of your feeling, which is love. After a point, it (became) untenable to me, and I had to act.

At the town hall, you made this very interesting point about the African American community as being "damaged." Could you dive into that a little bit for me?

I feel the imagery of that flag is very exclusively associated with language that says that "African Americans are chattel," and they're no more that. It's also been used as ... marching orders for young white men who take the lives of African Americans. There's a great deal of fear associated with that. If you have grown up, been raised in that, been steeped in that all your life, that affects you without (you) knowing it. When you go to school every day and that's what you receive is that flag, it tells you who you are. I think that the imagery has consumed us and our culture.

We have generation after generation of young men and women and old men and women who don't know their value, who don't know their worth. In certain situations, you have people who are so scarred and so damaged by that, that in the face of this injustice, they don't know how to fight back. They're so afraid of the repercussions. ... I call it isolation. Not wanting to feel isolated from your communities, not wanting to feel isolated from your coworkers. I understand it because I know what it's like when I take this position, and it's not expedient. It's not sexy. I have to fight tooth and nail to get folks sometimes to even want to participate with this kind of work that I'm doing, and I understand this. They don't want to feel like they're not a part of the American Dream. The knowledge of that is too painful to engage.

I believe it was Brother (Abram) Muhammad who brought up the idea at the forum of the black community drawing back from interacting from white America. How did you feel about his statement?

I believe that there is a merit in this idea, this notion of his kids, of his child being taught who he or she is in our schools, that it's our responsibility to do it ourselves. If we aren't getting what we need, this nourishment that we need for our people to thrive and survive in this country, then it's going to come from outside sources. Then we have to, at some point, take responsibility for that ourselves if it's not happening, and that's what's happening now.... We're not being educated about who we are, and that's what a woman said last night: "Just start with the kids on your block." Engaging with them and telling them, and not just telling them but listening to them and seeing where they are as African Americans (who) are in 2016 in Mississippi. From that, tell them "OK, these are things that I feel that you should know in order to feel like you should feel: You're powerful. You're strong. You're independent. You can speak up. You can speak your mind and stand for what is guaranteed to you."

When you were growing up, did your family stress pride in your African American heritage?

You know, I grew up with the story of my grandfather. That was his legacy that was weaved into my daily life—the story of who he was and the kind of man he was. One of those stories is that he was arrested in the middle of the night for bombing his own church. Society Hill (Baptist Church) was bombed by the KKK and police officers, and they completed destroyed it because he allowed Freedom Riders to have meetings at his church. So, that is a part of who I am, and the house that I live in is where that happened—where he was arrested. So, it's impossible for me to extricate myself from that. ... My mother was kicked out of Alcorn (University) for starting a protest there in the '60s. It's in my DNA to do this kind of work. If I didn't do it, I would be failing what I feel was my family's mission to be involved and elevate my community and do everything we can to be citizens of the world in the way that betters the life of our fellow men and women.

What do you say to the generation who want to be involved in changing things?

The first thing I would say is you have to do it. You have to decide that the situation here in Mississippi is just not acceptable. The high rate of poverty here, the state of the educational system here, all of these things are symptomatic of the principles and philosophies of that flag.

Standing up means standing apart. Some days, I don't feel like fighting. I just want to have a life and go to the movies with my niece and nephew, go to dinner every now and then, and hang out with my family, but I know that what I'm doing is the right thing. I know I'm doing this because of my niece and nephew and the kind of world that I want them to grow up in. For me, there's no option.

I have no interest in personal expressions that people make about the Confederate flag. If you want to put that flag on your car, if you want to fly it in your yard, that is your right. What is wrong is that I have to pay for it with tax money, and Mississippi is an American (state). Those flags are all over this country, and they're on public property. We who disagree, who think it's wrong, who literally know that people have used that flag as a marching order to kill people who look like us—we shouldn't have to pay for that. It's that simple, and that is all we're saying.

We're not trying to diminish your heritage or take anything away from what you think your forefathers did or fought for. Absolutely ... celebrate that heritage. But that heritage is also my heritage. We just had a different experience of it.

With the flag rally Tuesday, whom did you work with in gathering people up in D.C. for Flag Day?

We have a coalition of people, and you know, it's not some one organization. What I did was, when we decided we wanted to do it, I just got on the phone with folks that I knew who were doing this kind of work any(way). I told them to come meet me in Hattiesburg, and we just started throwing around ideas. We wanted to do this in D.C. in a much bigger fashion. We had to make a lot of compromises, but we'll be there. We'll be there, and our speakers are in place, so I feel that that in itself is a success, no matter the scope of it. It happening is a success. For us, this is the starting point. This is the launch pad. People have been trying to get rid of that flag for decades. This isn't anything new. We have a legacy of trying to do this kind of work here, and we're just living up to that legacy and trying to continue. We will continue to push until we get somewhere. What's happening on Tuesday is just a drop in the bucket, but if you keep dropping and dropping into it, it's going to get full.

Email Deputy News Editor Maya Miller story ideas at [email protected]. For more on Mississippi's past and the history of the Confederate flag, visit jfp.ms/slavery. This story was edited for length and clarity.